As the drumroll to the 2016 Summer Olympic Games grows louder, Rubicon Project on Wednesday said that it will make Olympics-specific inventory packages available from more than 30 publishers including Condé Nast and the USA Today Network.

With a combined publisher reach of more than 100 million monthly unique sports enthusiasts, the packages represent the first in a series of sports marketing initiatives Rubicon is planning in coming months to target hardcore sports fans.

As part of the initiative, Condé Nast is debuting the first in a series of ad packages focused around what it’s calling “key consumer moments” with the launch of Olympics­-specific packages.

These packages will be made available via Rubicon’s Guaranteed Orders platform. This is the first time Condé Nast has enabled advertisers to target audiences across its digital network for specific events like the Olympics, in a programmatic fashion.

“As a power user of Rubicon’s Guaranteed Orders system, we implement many campaigns through this platform monthly, and find it to be a great outlet for us to reach a large community of buyers through a single integration,” Evan Adlman, head of programmatic for Condé Nast, told Real-Time Daily via email.

"The custom packages we’re creating and our custom audience segments are the perfect products for this marketplace and a new way for us to transact against them,” he added.

Rubicon also disclosed the findings of its “2016 Summer Olympics Consumer Pulse Sports Poll” of more than 1,000 sports fans that outlines how they’re engaging with content.

And eight out of 10 millennials will have a second screen open “most of the time” while they watch the games. They’ll spend most of their second-screen time consuming and engaging with content related to what’s on TV.

In fact, millennial Olympic fans are more than twice as likely to have a second screen open “most or all of the time” compared to non-millennials (82% vs. 48%).

“We found that the always on, always connected digital Olympics fan will ‘watch’ the games in different ways. Fans are taking control of where and when they watch,” said Dallas Lawrence, chief communications officer, Rubicon Project.

The Summer Games offer ample opportunities for brands, and the second screen/device is another avenue for brands with less budget to make meaningful ad buys.

Lawrence said the goal of Rubicon’s Olympics advertising marketplace is to offer a pool of content from more than 30 publishers, not just about the games but also such related topics as gossip, culture, style and the social scene. Rubicon wants its Olympics marketplace to be the “go-to” destination for brands seeking to reach always-on Olympics sports fans at scale, Lawrence added.

Among the survey’s findings:

Rubicon worked with global polling firm Penn Schoen Berland to conduct 1,105 interviews among sports fans in the U.S. who self-­identified as die­hard or avid fans. 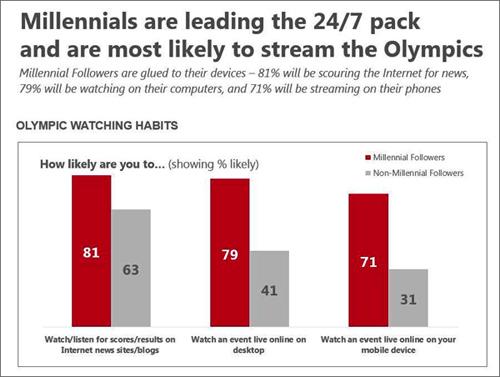