Did you ever wonder what a “day in the digital life” of a video consumer is? We know our own individual digital paths, but what about consumers in aggregate?

Video Addict: A single-device, heavy video user who spends the most time watching video, but also has the highest frequency of video sessions.

Technology Enthusiast: This user consumes content on multiple devices, but not necessarily video. [S]he has the second highest weekly hours online, but is often more interested in other online activities, like gaming.

Occasional Video User: A single-device user who doesn’t stream video regularly. Use of long-form video service is largely concentrated in the mornings and early evenings, and often limited to a single session per day.

The goal of the research, according to YuMe, was to identify the depth and breadth of media consumers touch throughout the day. Clearly, consumers engage with apps and video across computers, smartphones, tablets, connected TV, gaming consoles, and other media streaming devices.

"The study reveals the intersection of two key concepts: ‘audience first’ and 'liquid audiences.' Our research has revealed four distinct personas, with the key takeaway for brands being that each of these personas has very fluid viewing habits,” Stephanie Gaines, YuMe’s vice president, corporate marketing, told RTBlog via email.

“It’s only by going beyond the traditional segmentation models—going deeply into behavioral and most important, contextual understandings of each persona—that you can fully appreciate how dynamic each persona is," she added. "Engagement via video can become extraordinarily powerful, when you consider the fluid dynamics of liquid audiences.”

The study also revealed the smartphone’s dominance as the primary connected household device and also highlighted strong growth in streaming media player use.

The idea of a “liquid audience” as defined by YuMe is charactized by dynamic movement across devices and more variable video viewing behaviors, according to  Paul Neto, senior research director, YuMe. “Digital video—both ad-supported and subscription-based—provides prime opportunities for advertisers, brands and media to impact the 24-hour journey of digital engagement,” Neto stated.

The takeaway here is that in order for brands to influence and engage with the consumer segment of their choice, they need to employ a multi-platform video strategy with cohesive messaging that optimizes for reach, frequency, and relevancy.

Consumers’ daily digital journey includes numerous device touch points: Sixty-four percent of game console owners own or use regularly a tablet. Eighty-one percent of users who own or regularly use a streaming media device own a PC.

This is not at all surprising; people have been talking about “numerous touch points” for years. What is newer is the number and variety of device types, and the fact that consumers switch back and forth among devices and platforms more frequently than ever.

Connected home devices are additive, not replacements, for existing devices: Connected home entertainment devices such as smart TVs, streaming media players, and game consoles are complementing primary online devices like PCs, smartphones, and tablets, rather than competing against them.

The concept of complementing vs. competing devices offers new possibilities for advertisers to develop new forms of creative.

Data for the research was collected using the Verto Smart Panel, a patented measurement tool that presents all screens and media types in a statistically driven, single-source measurement panel. Participants included approximately 8,000 U.S. adults over the age of 18. 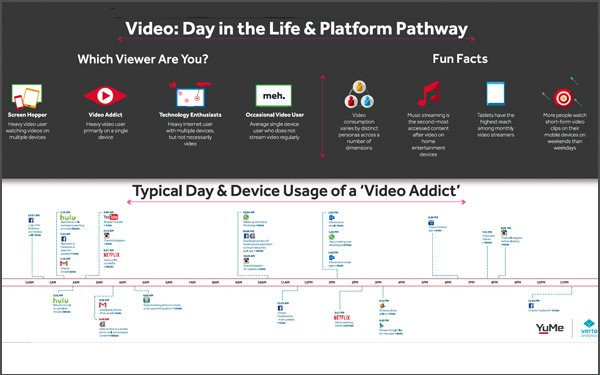