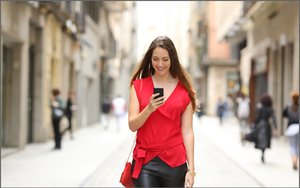 Google is trying to help retailers track in-store visits and sales by connecting real-time data from beacons and converting them into messages and advertising on smartphones while consumers peruse the store or after they have left.

The beacon transmits the data in real-time. The smartphone listens to the beacon and talks directly to Google's Chrome browser on any Android or iOS device. Once an individual opts in, the retailer can initially connect with the consumer in the store and reach out to them through an SMS message or email on their smartphone while they shop or after they have left the location.

Consumers must opt in to location services on their phone to allow retailers to send an ad, coupon or other message or capture location data for later use, according to Sunalini Sankhavaram, direct at Zebra Technologies.

The technology format -- called Eddystone and developed by Google -- also allows retailers to count the number of consumers who walked into the store and the percentage of them who made a transaction, similar to the way that advertisers track online consumers who visit their Web site.

"Similar to the online world, where the technology recognizes the consumer and shows recommendations for other things they might like based on past buying history, location services in the store now allows retailers to collect information such as the number of people spending time in a specific department," Sankhavaram said.

Sounds innovative, but here's the reality. Only 11% of companies are piloting or testing beacons, and 3% regularly using the technology, according to Forrester Research’s online global survey of 3,600 adults. Unlike Macy's, some 56% of companies have no plans to test or use beacons.

Opting in to location-based services allows the retailer to track the individual through the store and retarget them with discounts and specials either while they're in the store or after they left.

"You don't want to get a message in every department in the store because people will consider it spam," Sankhavaram said.

While retailers will collect data from the phone as the consumer walks through the store, the shopper will likely only receive one push notification based on points of interest in the store.