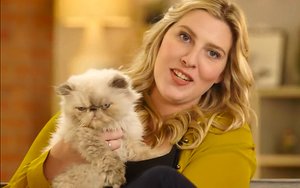 The content celebrates cat culture as well as cat rescue and adoption. The companies’ partnership also includes a co-branded presence at CatConLA, a convention and symposium that brings the Internet obsession with cats to life, occurring June 25 and 26 at The Reef in Los Angeles.

The first video, “People Who Hate Cats Live with Cats for a Week,” has already garnered more than 6.5 million views on YouTube and Facebook since debuting June 1. The second co-branded video, “Signs You’re a Cat Lady,” will premiere in July, and a third video, “People Decide to Get a Cat,” will focus on cat rescue.

The BuzzFeed content series, sponsored by Rachael Ray Nutrish Super Premium Food for Cats, focuses on the relationships between cats and their humans in a creative way.

The first video followed three cats into the homes of self-proclaimed cat haters for one week and chronicled their experiences. They were provided with Nutrish food, which is featured prominently, to feed the cats. Following the project, the cats unanimously won over their respective people, and all three were permanently adopted by either their human counterparts or members of the crew.

In addition to the content series, Nutrish and BuzzFeed will also have a co-branded presence at CatConLA. Visitors to their booth will have the opportunity to take home a custom “Caticature,” or a caricature of themselves melded with their cat, created on the spot by a caricature artist.

Members of BuzzFeed’s ad team will photograph the caticatures, as well as the humans and felines they represent, for a custom co-branded post titled, “This is What Cat Parents Would Look Like if They Were Cats,” which will be published in July. Visitors to the booth will also have the opportunity to create and share playful animations of their own photos in a custom GIF booth.