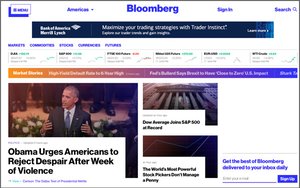 The social giant just reached a deal to live-stream several Bloomberg TV shows, including Bloomberg West, What’d You Miss? and With All Due Respect.

The news comes just a day after the social giant announced a partnership with CBS News to live stream both the Republican and Democratic national conventions.

The efforts are part of a bigger video strategy by Twitter to reinvigorate its relationship with users and brand marketers.

Presently, there is no sign of advertising on Twitter’s Live video page, but analysts say it's sure to change. “We expect direct monetization to follow,” Nitesh Patel, a director at Strategy Analytics, notes in a new report.

Earlier in the year, Twitter won the digital rights to NFL games on Thursday Night. As such, Twitter plans to stream 10 Thursday Night football games while they are simultaneously being shown on NBC, CBS and the NFL, this fall.