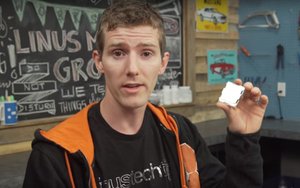 Intel has signed on three YouTube influencers to "unbox" the story of their commitment to using only conflict-free (CF), alternative minerals to make their processors. While this environmental and social push means greater economic and safety opportunities for miners in the Congo, it also means consumers can feel better about the products inside their electronic devices.

The campaign -- led by Teresa Herd, VP-global creative director at Intel -- aims to educate consumers on the origin of the material in smartphones, tablets, laptops and desktop computers. It is also intended to bring awareness to consumer products goods manufacturers that may not be aware of the troubles in Africa.

The components in many devices are made from materials that come from mines in the Congo where innocent people are being threatened by warlords who earn millions of dollars trading materials, according to Intel.

"We partnered with three unboxers — Unbox Therapy, Linus Tech Tips and Joanne Tech Lover — and asked them to film an unboxing video and post it online," Herd said. "None of them knew what was inside the box."

Through the unboxing, the three gained an experience that enabled them to learn about Intel's CF program.

Earlier this year, Intel pledged it would begin using other materials to manufacturer its processors, which are now made with what the brand calls "CF materials." This means the company manufacturers its products with tin rather than lead, as well as gold for pins, tantalum for solid state capacitors, and tungsten for integrated circuits.

The first video of this three-part series kicked off with Unbox Therapy. The next video launches Monday, July 25, 2016, with Linus Sebastian, which is best known for creating and hosting the tech-ordinated show Linus Tech Tips.

The video series -- created by Agency Inside, Intel’s full-service internal creative agency and focused on telling the brand's stories -- is  the beginning of a much larger Conflict-Free awareness campaign, Herd said.

The influencers will post the videos directly to their own YouTube page. "Beyond that, we are using our social media channels to promote the initiative and reach a more diverse audience that may have not heard about it through these influencer’s channels," Herd said.

The "unboxing videos" were made specifically for the YouTube channels, and "are so specific to that medium that to run them on TV wouldn’t be authentic."