Expanded text ads feature two headlines, each with 30 characters, and one long 80-character description line. Guitar Center, L'Oreal, EE and Kueski are some of the brands running early ETA tests with Google.

Independent data from ad agency Merkle confirms Google's assumption that shows these longer ad headlines are more useful when searching for information on mobile devices because they provide additional information before clicking on an ad.

"Google hopes with this change they can generate higher click-through rates, and we indeed see that, but it's still early days," said Mark Ballard, senior director of research at ad agency Merkle.

In the Digital Marketing Report Q2 2016 that Merkle plans to release Tuesday, early tests show an increase in click-through rates (CTRs) of around 8% for tablets and 4% for smartphones, compared with the overall 20% possible increase Google notes in its blog post announcing the rollout.

When separating brand and non-brand ad groups to mitigate the effects of query mix on the analysis, Merkle found that ETAs produce a 16% higher CTR than traditional ads for non-brand ad groups on desktop computers for the median advertiser analyzed for the study.

The differences vary significantly by advertiser and even by device for each advertiser, per Merkle. A number of individual advertisers see ETAs produce lower CTRs for non-brand traffic on certain devices.

Ad groups using the longer format are receiving 47% of total impressions from ETAs, per Merkle's study. 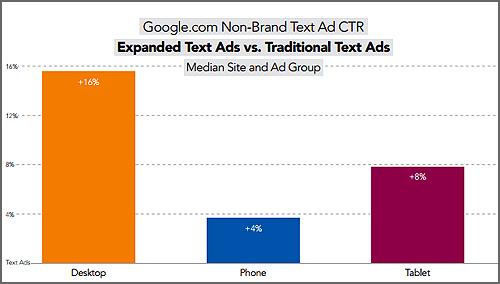