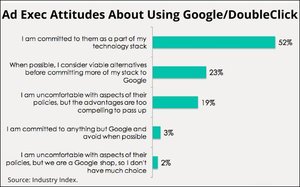 When it comes to managing their digital campaigns, marketers increasingly face a Hobson’s choice. They want greater transparency and access to data about the consumers they are trying to reach and influence, but they need to work opaquely with giant “walled gardens” like Google and Facebook because they need the scale and efficiency of the audiences they reach.

That’s the primary finding of a first-of-its-kind survey of ad execs. The study, which was commissioned by independent ad server Flashtalking, has two components: a quantitative survey fielded by Industry Index and qualitative follow-up interviews conducted by management consultant Deloitte.

The findings, based on responses from 180 brand and agency executives, found how dependent they are on two giant digital media platforms and how frustrated they are with their inability to get access to user-level data that would help them understand the results of their digital campaigns, and/or build ongoing relationships with those users.

The data ownership debate is not new. It was crested more than seven years ago, when media-buying giant GroupM quietly changed the terms and conditions on the invoices of its digital media buys, asserting that the agency and its clients owned all data from campaigns served through various publishers and platforms to consumers. But the issue has become more pronounced as the amount of user data controlled by the giant platforms continues to amass as they extend their reach across new platforms, publishers and advertisers.

While the industry continues to develop and refine various attribution models to glean insights about how their campaigns are performing overall, it’s still not as direct or explicit as being able to measure results based on actual user data, says Flashtalking CEO John Nardone, a pioneer of digital media on Madison Avenue who jumped to the ad-serving side a couple of years ago, because he saw the opportunity for an independent player.

To be clear, Flashtalking does have a horse in the race. It competes with Google’s DoubleClick in the ad-serving marketplace, but its point of differentiation vs. the big walled gardens is that it does not make a market out of media -- just ad serving and creative services, data analysis and performance measurement associated with the campaigns it serves.

As a result, Nardone considers Flashtalking “media neutral” and it initiated the study to shed light on the growing paradox between digital audience scale vs. data transparency.

“I don’t think there’s any surprise,” Nardone acknowledges about the study’s findings, adding, “but what was interesting to me was what the gap is.”

While more than half (58%) of ad execs cited data ownership and access as their top priority,” more than half (52%) are also committed to using Google’s DoubleClick. Nardone describes it as a form of a “Stockholm Syndrome,” a psychological phenomenon that occurs when hostages begin to empathize with their captors. They are frustrated by the opacity of working with walled gardens, but they are beholden to using them because they need efficient access to their audiences.

Nardone says it is difficult for advertisers to wean themselves off the platforms, because of the way the marketplace has been structured. He noted that while it is becoming common for advertisers to build their own direct ad-serving capabilities in Europe, where markets are somewhat less constrained by Google and Facebook, it is virtually impossible for them to do it in the U.S., because the platforms require any third-party ad server to undergo a “certification” process before they can access their audiences.

While it is possible for brands to use their own first-party data to target users through the walled gardens -- converting them into Facebook’s “custom audience segments,” for example -- Nadone notes that it is all processed through the platform and the advertisers don’t have access to the “level of granularity” of knowing which audiences responded to which ads.

“They know what went into the campaign, but they don’t really know what came out,” he says.