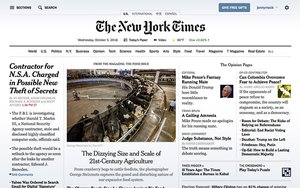 The New York Times is expanding its Flex Frame Everywhere cross-device digital advertising solution to run across desktop and smartphones.

According to The Wall Street Journal, this is the NYT’s strategy to phase out banner ads — now considered by many to be a bland ad format losing its popularity on its site. They will be replaced with Flex Frame, its own proprietary, native display ad offering.

Banner ads will now only appear near the top of 30% of the NYT’s desktop Web pages, Sebastian Tomich, senior vice president of advertising and innovation at the newspaper told WSJ, and he hopes that number will continue to decrease.

The launch of the next phase of Flex Frame Everywhere is an effort to modernize and improve the digital advertising experience for both marketers and users on NYTimes.com and its apps, the company stated.

Google is the first to adopt the new ad products, as part of a site-wide advertising takeover today to promote the launch of Google’s new phone, Pixel.

“The way advertisers are using Facebook is very native, for example, but you haven’t really seen many publishers using that model,” Tomich told WSJ. “There’s a good amount of negativity around the display business in the market now, but it’s a staple for us.”

Flex Frame is described by the company as a “horizontal, large format, cross-device, responsive unit which appears in-stream alongside editorial content.”

The units are available on the NYT’s homepages, section fronts and between paragraphs in article pages across all platforms. They can also feature video, 360 video and images, slideshows and regular images.