Publicis Media Does Not Want Another Walled Garden 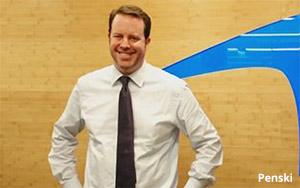 The industry has not seen the full fallout from Facebook's misattributing viewing metrics, says Publicis Media Exchange CEO Dave Penski during a keynote conversation today with Broadcasting & Cable's Jon Lafayette during the Advanced Advertising Summit at the Grand Hyatt in New York.

"It will impact client spending," he says. "We have known the average time spent on Facebook was nowhere near 10 to 11 seconds. It was much less than three seconds. This will be a major shift for clients."

Most advertisers are taking a pragmatic approach to "follow the eyeballs" by utilizing a mix of media spend determined on a client-by-client basis. Though he adds that some clients "are using this data to make the decision to move dollars out of [online] and towards TV."

The controversy is less about overcharging than how to effectively use this platform. "What they billed and paid on was correct," he says. "The real challenge was if the duration is only for one or two seconds, then what type of message do we put in there and how to make consumers make want to spend more seconds with them?"

Still, he doesn't believe this challenge will ultimately hurt Facebook, noting that the platform is not doing anything differently from others.

Penski hopes these inaccuracies will strengthen industry resolve to improve measurement. "We need a true third-party measurement that isn't a surrogate with data provided by the same partner." What we don't need, he says, is another "10 walled gardens. We really need operating models to pick and choose from. More standards is a more positive thing from our point of view."

Despite a strong upfront and scatter market, he is concerned that there hasn't been a runaway hit this TV season. "I wouldn't say money is flooding back, but it is very strong." Some categories, like telecommunications, are as competitive as they ever have been. He is not worried about the NFL and its declining ratings and is curious as to how things will change post-election.

Data is dramatically changing the Publicis Media workforce and hiring going forward, with nearly half of all new employees going to programmatic units. He jokes that as a history major, he would have a tough time getting his foot in the door. "We are now looking at more college engineering degrees."

The France-based conglomerate is benefiting from its new 'Power of One' structure, adding USAA as one of its more recently signed clients. "Publicis' reorganized media environment business is about scale and insight," says Penski. He points out that the holding company is responsible for more than $80 billion dollars globally, yet it was buying it in "small parts."

The most important thing with this new model, in his admittedly biased opinion, is leveraging its scale. "We are the number one ad spend in the U.S. but we [didn't] act like it." Thanks to cross-collaboration, Publicis can make better investments and test something in one agency that can then spread throughout the entire network, he says.