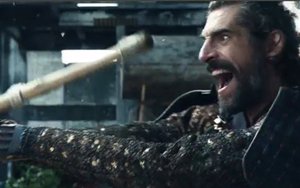 Much as the producers of the 007 movies updated the James Bond character and his environs without changing the essential personality or action formula, Dos Equis and Havas New York have kept the tongue-in-cheek copy and sly close-ups of the suave character, but made a few tweaks.

The team said that the character would now be shown amid groups of friends. But in addition, at least in this first spot, he’s actively competing with an attractive woman in dangerous sports like racing an airboat across the desert and sparring in Samurai armor — rather than just flirting with her (although that also goes on).

The intention of reaching out to the growing Hispanic consumer base is also clear. As revealed last month, the new actor can speak Spanish, as well as English. And while the character still says, “I don’t always drink beer, but when I do, I prefer Dos Equis,” instead of finishing with “Stay thirsty, my friends,” he now says “Stay thirsty, mis amigos.”

The last vignette in the spot (“He played college football…in high school”) highlights the brand’s multi-year sponsorship of the College Football Playoff.

The brand will also run two, 15-second spots — one featuring the same football vignette — between the Playoff through the College Football Playoff National Championship on Jan. 9.