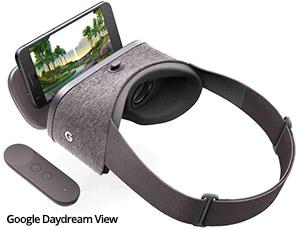 Virtual reality might get a boost this holiday season as new VR products are about to hit the market.

Google’s Daydream View, which was announced last month, hits select retailers in five countries on November 10, according to Google. The unit, which includes a mobile-based VR viewer and an accompanying wireless controller, will be priced at $79 in the U.S.

New VR content is also set to launch exclusively with Daydream View, including a news program and comedy show from RYOT on Hulu VR, an interactive VR data visualization and dashboard app from The Wall Street Journal and a list of VR games.

Unfortunately for many consumers, Google’s Daydream View is compatible only with 'Daydream-ready' phones, which is currently limited to Google’s new Pixel phone. Google has also built a pop-up shop in New York for consumers to check out the phones and Daydream View, as well as other new products like Google Home.

On the virtual reality gaming side, Sony is projected to gain a hold on the segment with its recently-released PlayStation VR headset, which costs less than its Oculus and Rift counterparts at $400 (without controllers).

By the end of this year, DigiTimes projects that more than 3 million PlayStation VR units will be sold. Another forecast from IHS Technology is about half as high, but expects the global installed base of PlayStation VR units to be twice as large as Oculus’ Rift and HTC’s Vive systems combined.

Rather than requiring an expensive, high-end PC, the system is driven by a PlayStation 4 gaming console.

Oculus recently launched wireless handheld controllers for its Rift headset, which are expected to ship in mid-December.

In addition to introducing new capabilities for the VR headsets themselves, PC-based VR companies are working to reduce the cost barriers.

Oculus recently developed a new technique to improve the efficiency of how images are displayed on its headsets, which reduces the computing requirements to operate the system. As a result, the cost of a VR-ready PC is now $500 instead of more than $1,000, according to Oculus.

In addition to also lowering the computing requirements to a $500 PC, Microsoft also seems to be focusing on lowering cost barriers for headsets. At a recent event, Microsoft announced a lineup of new headsets from HP, Dell, Lenovo, Asus and Acer that will have a starting cost of $299.

The headsets, which are mostly geared toward mixed-reality applications, are planned to launch next spring alongside the Windows 10 Creators Update. More information about the specifics of each device will be discussed at upcoming events next month, according to Microsoft.