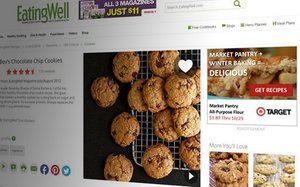 Meredith Corp. on Thursday announced a partnership with The Trade Desk, Inc. to launch a programmatic approach to digital shopper marketing.

At launch, The Trade Desk will have exclusive access to Meredith’s programmatic shoppable display inventory on Allrecipes.com, which has more than 45 million monthly unique visitors, along with other Meredith sites, including Bhg.com, Shape.com, and MarthaStewart.com.

The goal of the partnership is to help advertisers use Meredith’s data and insights into its audience, and pair it with their own data to target shoppers at different points in their shopping journeys.

Pilot campaigns executed by Meredith and The Trade Desk that used the technology demonstrated up to 19 times return on advertising spend and significant in-store sales lift across multiple retailers. The results were measured by Nielsen SimTest technology.

“We reach millions of grocery shoppers every day who are about to step foot into a store, and we have first-party data that gives us unique insight into their grocery shopping behavior,” said Chip Schenck, VP of Data & Programmatic Solutions at Meredith Digital. Shoppable display ads use Meredith’s proprietary audience intelligence and digital shopper marketing platform to deliver the right ad to each user on the path to purchase.

“To date, publishers' way of ‘productizing’ display inventory between PMPs [private marketplaces] and the open Web was rudimentary at best,” Schenck said via email to Real-Time Daily. “Meredith's new shoppable display platform is an example of leveraging a publisher's unique capabilities – data, technology, talent assets, and more – to advance programmatic advertising to the next stage in its evolution.

"Essentially, we’re moving into a product phase for PMPs, in which the product is no longer just inventory that is above-the-fold or below-the-fold, viewable or not, but rather, real ad products (inventory or otherwise) that are normally only available via ad server-based campaigns,” he explained.

What’s different about Meredith's new programmatic shoppable display platform is the way in which it’s taking proprietary publisher technology and making it work across an entire portfolio in a real-time bidding environment, according to Schenck.