Marketers have much more to consider this holiday season as they try to optimize campaigns and turn on a dime. Will gift cards catapult sales through smartphones? How do Google AdWords and Bing Ads play a role in local search targeting? Which direction should brands take when driving foot traffic through search engine optimization and paid search to local stores?

Today marks the start of a shopping frenzy both online and offline as retailers prepare for a combination of Black Friday and Cyber Monday deals. HookLogic, a Criteo-owned company, released its first round of ecommerce data Monday.

HookLogic pulled data in aggregate over the first two weeks of November from its retailer network, which includes Walmart, Target, Best Buy, Toys 'R Us, Macy's and other retailers.

Interestingly, online sales fell 5% the day before the presidential election, compared with the year-ago date, and 16% the day of the election. The day after the election, ecommerce plummeted 23% year-over-year.

While it fell during the days surrounding the election, ecommerce made a quick comeback -- climbing 24% YoY on the Thursday after the election as consumer confidence rebounded and Americans were ready to get back to their holiday shopping.

Driving purchases through smartphones has its benefits. Adobe Digital Insights predicts that mobile Web site visits will overtake desktop for the first time during the holiday season. But although more Web traffic will come from mobile, the devices will drive only 34% of revenue. Consumers also tend to put less in their carts when on a smartphone -- an average of $35 less per transaction.

Despite the rise of searches on mobile devices, consumers will continue to do most of their buying on desktops and in stores this year. Prosper Principal Analyst Pam Goodfellow believes many consumers will search online and in store, browse ad circulars and even login to Facebook to find inspiration for unique and memorable gifts for friends and family.

Goodfellow's prepared statement, published Monday with survey findings from the National Retail Federation, found that nearly 56% of shoppers have already started buying holiday gifts -- the second-highest level in the history of the survey, down slightly from the record nearly 57% during the same time last year. Only 3% said they were finished shopping.

The NRF survey, which asked 7,206 consumers about holiday shopping plans, was conducted November 1 through November 8.

Gift card will become a popular gift this year. Most can be purchased online. And while there's no data to back up the fact, it seems the online purchase of gift cards could help to increase sales through smartphones.

The NRF shows that holiday shoppers are planning to purchase an average of three gift cards with an approximate value of $46 per card, the second most-popular gift after clothing. Some 61% of shoppers said they would buy clothing.

Spending on gift cards is expected to reach $27.5 billion, up from last year’s planned $26 billion. Restaurant gift cards at 35% are the most popular types, followed by department stores at 33%, Visa/MasterCard/American Express at 22%, coffee shops at 21% and entertainment at 17%. 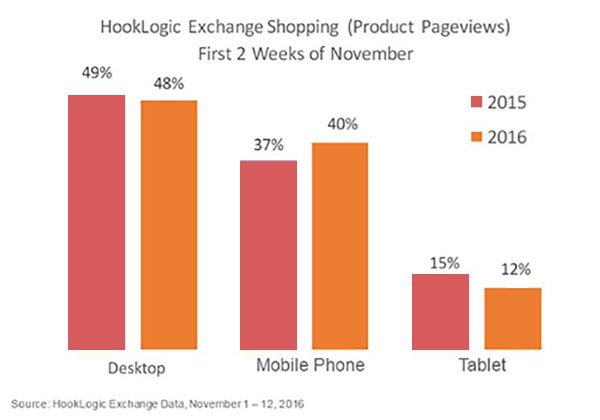