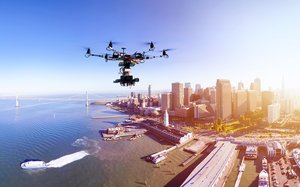 Will Apple's push to collect mapping data with drones help build out and support an ad-targeting network?

The iPhone maker will reportedly use drone technology to accelerate data collection and improve the accuracy of locations. There are some parallels to Google Wave, but rather than using human intervention to report on changing road conditions, Apple will do it with drones to examine street signs, track changes to roads and monitor whether areas are under construction. The drones would transmit the information to Apple's Map team, who would update information to users.

The new Maps platform will offer the ability to view inside buildings and have improved car navigation features. The report from Bloomberg comes with information about Apple's September 2015 filing with the Federal Aviation Administration, asking permission to fly drones for commercial purposes. In a response dated March 2016, the FAA granted Apple approval to operate an unmanned craft to collect data, and take still photos and video.

The issue for mapmakers is to keep map coverage up to date, said Mike Dobson, president at telemapics.com, which he founded after working at Rand McNally as chief technologist for more than a dozen years. Very accurate data is required to improve ad targeting platforms with the ability to identify exact locations of streets, buildings, transportation targets and more, Dobson said.

Having extremely current mapping data, similar to what drones can offer, could certainly help Apple with ad revenue, but Apple and ad revenue do not seem synonymous to Dobson. He said it seems more realistic to think about how the data will help Apple catch up with Google's Mapping platform.

"The mere consequence of the friction of distance limits how frequently and how much information companies can gather from diverse geographic areas to update maps more quickly," he said.