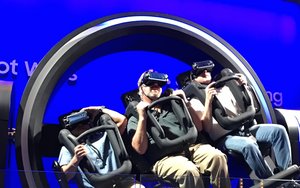 LAS VEGAS -- In case there was any danger of attendees missing the scale of virtual reality at CES, Samsung made sure everyone got a taste as they walked into the main door.

Dominating the entire central entrance of the main hall at the Las Vegas Convention Center was a three-part, Universal-type arrangement where attendees could get strapped in, put on a VR headset and be taken for a spin -- literally.

One of the devices, the gyro, took three people at a time on a VR journey, motion included.

Two other rides, holding dozens of people at a time, took somewhat more sedate trips, such as a high-speed boat race.

People lined up down the hall to get a VR ride.

If nothing else, the demonstration showed the impact of virtual reality when combined with associated motion. This is essentially the same concept as using VR on roller coasters, already in operation at some parks.

From a promotional aspect, any of the 165,000 attendees who came into the CES through the main entrance now know that Samsung plans to be a major player in virtual reality.