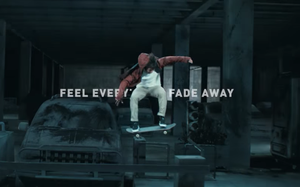 Mountain Dew is kicking off 2017 with a new, mobile-first global campaign, and revamped packaging.

The new campaign’s tagline, “There’s No Feeling Like Doing,” alludes to the natural high that people experience when they’re performing an exciting activity.

The brand’s umbrella tagline remains “Do the Dew.”

The new creative, from BBDO New York — athletes-in-action videos filmed by Andreas Nilsson — will appear in more than 20 countries during 2017.

The first 30-second TV spot, “Fade Away” (below), shows pro skateboarder and brand rep Sean Malto jumping over a car. The feat is filmed in slow motion and accompanied by classical piano music. The idea: Everything else just fades away when Malto is totally absorbed in the sensation of skateboarding.

The U.S. campaign is optimized for social and mobile, including launching through a vertical video format on Malto’s Facebook page.

“Knowing that Millennial consumers see messages first in the palm of their hands, it’s no longer about figuring out how creative can be optimized for mobile at the end of production, but now how it can be designed to thrive in mobile from the outset,” said Greg Lyons, SVP of marketing, Mountain Dew, North America.