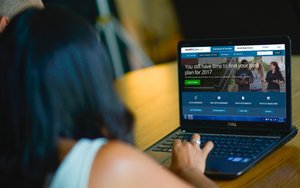 In the last days before the deadline to sign up for health-care coverage through the exchanges set up by the Affordable Care Act (Obamacare), the Trump administration forced the cancellation of advertisements informing Americans about the deadline.

“When we found out President Trump had unilaterally defunded advertising for people to be routed to where they could sign up to purchase life-saving health care, we decided we had to do something,” Jim Walsh, cofounder and CEO of DSPolitical, told Red, White & Blog.

The weekend before Tuesday, January 31, the last day to sign up for health-care coverage, DSPolitical worked with former healthcare.gov CMO Josh Peck to get “life-saving” ads out as quickly as possible.

Through a GoFundMe campaign and help from the Democratic Legislative Campaign Committee, Rising Tide Interactive and more than 50 other individual donors, DSPolitical was able to help more than 4,000 people sign up for health-care coverage.