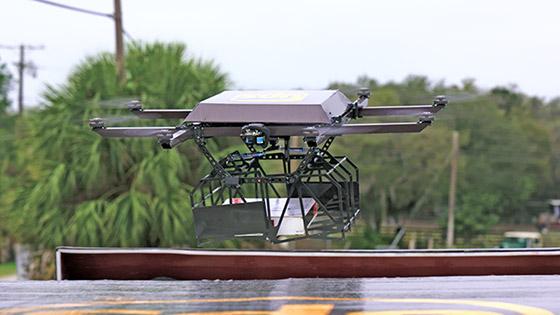 Package delivery by drone may soon become a reality in the U.S., with another successful drone delivery test just completed.

UPS teamed up with electric truck and drone company Workhorse, to deliver a package by drone in Lithia, Florida.

Unlike other drone delivery trials, such as Amazon’s Prime Air initiative, the drone flew from the truck and fulfilled the last portion of delivering the package.

“This test is different than anything we’ve done with drones so far,” Mark Wallace, senior vice president of global engineering and sustainability at UPS, said in a statement.

“It has implications for future deliveries, especially in rural locations where our package cars often have to travel miles to make a single delivery,” Wallace said.

UPS used Workhorse’s ‘HorseFly’ delivery system, which includes an electric delivery truck with a retractable roof section and an octocopter that can carry packages weighing up to 10 pounds.

The octocopter sits on top of the truck and packages are loaded into its cargo cage through the retractable portion of the truck’s roof. From there, the driver sets the drone’s destination and route via a touchscreen in the truck and the drone then autonomously launches, delivers the package and returns to the truck, wherever it may be.

The idea is that a driver can deliver one package by hand while the drone automates another delivery nearby, increasing overall efficiency and cost savings. UPS says reducing one mile per driver per day can save $50 million per year.

The route of the drone was pre-configured by Workhorse for this test, but UPS says ultimately the routes could be automated as a part of its routing software, which currently optimizes truck navigation.

Outside of delivering packages, other drone markets are expected to grow in the coming years.

For example, over the course of the next three years, the market opportunity for drones is expected to grow to $100 billion, according to a recent study by Goldman Sachs Research, with military applications accounting for 70% of that.

However, the consumer segment of the drone market is the second-largest, with an expected $17 billion between now and 2020, followed by commercial and government uses with $13 billion.

In 2020, 8 million consumer drones will be shipped, generating $3 billion in revenue -- up from an expected $2.7 billion generated by the end of this year, according to Goldman Sachs Research.

In addition to UPS, other major brands have also been pursuing drone-related initiatives.

Verizon’s plan is to create an entire drone integration, management and operations ecosystem for businesses of any size.

Consumers also seem to be expecting these types of deliveries as an option in the future.

Consumers rank Amazon as the most trusted brand when it comes to drone delivery, followed by UPS, FedEx and USPS, according to that study.

Future plans for the delivery system used in the UPS test include expanding the number of drones to up to five per truck, according to Workhorse.