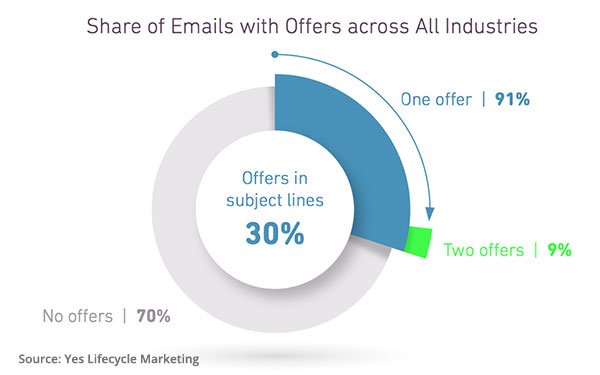 Nearly one in three emails during the 2016 holiday season contained a promotional offer of some kind, according to new research released Monday by Yes Lifecycle Marketing.

It’s worth noting that Yes Lifecycle Marketing’s report evaluates email during a particularly promotional-heavy period during the year -- the holidays. Yet across all industries studied, it was actually loyalty programs that outperformed all other offer types in email engagement -- a marketing incentive that can be applied all year round.

Incentives related to loyalty programs outperformed all other offer types, generating the highest open, click, and click-to-open rates. Promotional offers with a certain percentage off drove the highest conversion rates for the retail industry, with 7.9% of clicks leading to a purchase.

Interestingly, emails without explicit offers in the subject lines saw a 28% uplift in open rates compared to emails with promotional content. Clicks and click-to-open rates also increased 67% and 34%, respectively, according to Yes Lifecycle Marketing.

A vast majority of email promotions only contained one offer, but 10% of retail incentives and 9% of overall promotions contained two offers. Free shipping was most likely to be paired with a second promotion, perhaps suggesting that consumers are no longer incentivized by delivery offers.

More than 60% of subject lines that included "free shipping" also included a second incentive, according to Yes Lifecycle Marketing, noting “Free shipping and 20% off!” as an example. These paired deals generated higher email engagement rates (opens and clicks) than emails only containing free shipping promotions.