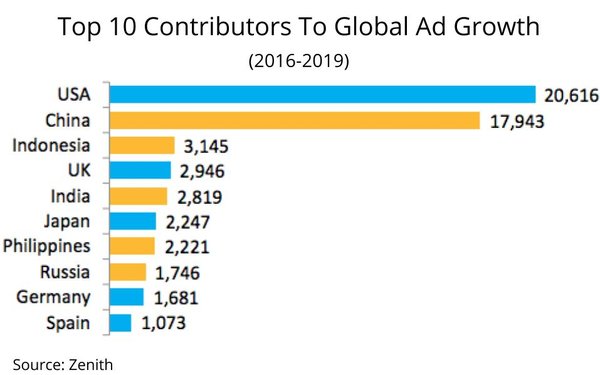 The U.S. will continue to be the primary engine driving the global ad economy for the foreseeable future, according to the latest forecast from Publicis’ Zenith unit. The updated forecast, released early this morning, projects that the U.S. will contribute 28% of worldwide ad expansion through 2019 -- which is significant considering how mature the U.S. marketplace is relative to big developing nations.

China is projected to be the second-largest contributor, with an estimated 24% of global ad growth coming from the Chinese marketplace.

Indonesia, the U.K. and India tie for third-place ranking, with each contributing about 4% of global ad growth.

Overall, Zenith projects global ad expenditures will expand 4.4% both this year and next, reaching $592 billion by the end of 2017. The agency’s 2017 forecast is unchanged from its previous outlook released in December, but its 2018 estimate was revised downward by 0.1 percentage point due to downgrades in its outlook for Western Europe and Asia Pacific.

By medium, much of the global ad expansion is projected to come from mobile and desktop Internet ad spending.

Zenith projects that Internet ad spending will expand 13% to reach $205 billion in 2017, marking the first time the medium had broken the $200 billion threshold.

In terms of market share, the Internet will account for nearly 37 cents of every dollar spent on advertising this year, up from 34 cents per ad dollar in 2016.

“This will be the first year in which more money will be spent on Internet advertising than advertising on traditional television (which will total $192 billion),” Zenith’s new report notes, adding: “The sheer scale of Internet advertising means its growth rate is slowing. Internet ad spend grew 17% in 2016, down from 20% in 2015, and we expect growth to slow to 13% in 2017, 12% in 2018 and 10% by 2019.”
ad spending, advertising week, asia, europe, forecast, internet, mobile, tv
Next story loading