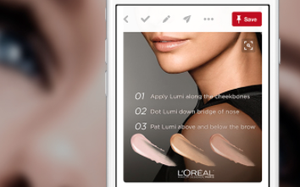 Pinterest began offing app-install ads to all brands on Tuesday. The ad product — Promoted App Pins — is now available on the Ads Manager self-service platform as well as through its application programming interface (APi)

The company has been testing the feature with about 100 brands running mobile campaigns. Participating brands include Ibotta, Stash and Glu Mobile.

Promoted App Pins aims to enable those who are pinning images on the site to easily find mobile apps mixed in with the content.

The ad feature is a twist on Bing's and Google's playable ads, where the video ad format allows players to try the game first before they download the app. Pinterest's ad format does not allow site visitors to explore the app before downloading, but it does make it available similar to a pin on a board.

During its test with brands, Pinterest says more than 70% of advertisers successfully reached their install goals using Promoted App Pins. The challenge for brands continues to be a decline in app installs, depending on the analytics firm sharing the numbers.

Mobile users in the United States install apps far less often as of December 2016, falling 38% since December 2014, according to Adobe Analytics.

During the same time period, the total number of times apps are being opened by users in the U.S. fell 28%.