No More Cheesecake: Carl's Jr. And Hardee's Get Branding Overhaul 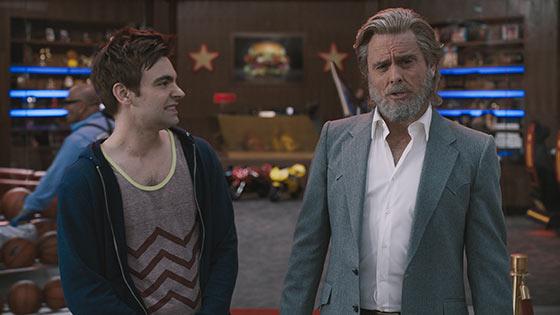 CKE and its agency 72andSunny are rebranding Carl's Jr. and Hardee's with new creative for broadcast, online and social media films, as well as a complete redesign of the fast food chain’s packaging, in-store menus, employee uniforms and company logo.

The concept introduces Carl Hardee Sr., the fictional founder and amalgamation of Carl Karcher and Wilbur Hardee, who has returned to reclaim control of the company.

An extended-cut film that runs online and on broadcast, features young Carl Junior, played by improv comedian Drew Tarver. He’s been running the family business while kicking back in his office outfitted with a mechanical bull and hot tub.

In an unexpected visit to headquarters, Carl Hardee Sr., who is played by Charles Esten, bursts into Junior’s office, accompanied with a group of movers who immediately make changes, throwing out pictures of these bikini-clad models.

Hardee Sr. then explains that he became sidetracked, while recounting the brand's origin story. He reveals his plan to return to the company to its roots, and echoes its commitment to producing quality food. The film includes the brand’s new tagline, “Pioneers of the Great American Burger.”

“The best stories have a storyteller,” says Jason Norcross, partner and executive creative director, 72andSunny. “Creating both Carl Hardee Sr. and Carl Hardee Jr. gives us a fresh way to talk about the food, while helping the brand get credit for all the pioneering it does in the industry.

A 30-second film uses images from GIF artists and music from trap artist Oiki to reveal the new tagline while showcasing the brand’s food innovation achievements, including producing the first 100% Black Angus and grass-fed beef burger in the fast-food industry.