A new study comparing an array of video ad formats has found that pre-roll ads are not only seen as least intrusive by consumers -- they also have the best recall on both mobile devices and desktop computers.

The study, which was conducted by IPG Media Lab and YuMe, found that compared to mid-roll and outstream formats, pre-roll is considered the least interruptive across devices. Only 17% of mobile device users feeling that the ad interrupts the content compared with 60% on outstream and 72% on mid-roll. 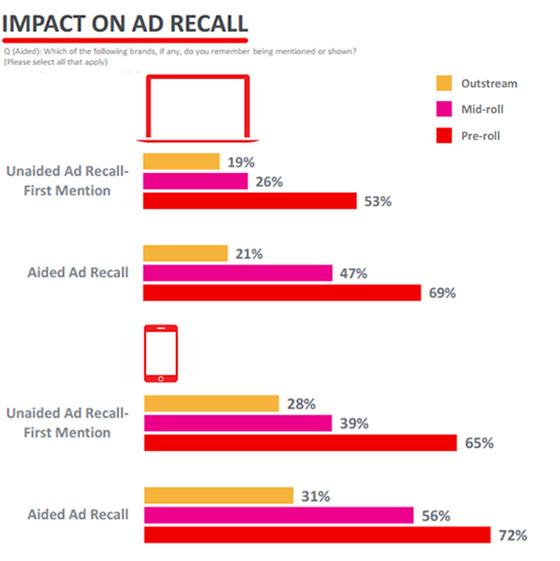 The study also found that 54% of consumers found pre-roll ads on mobile are engaging, compared to 37% and 44% on outstream and mid-roll, respectively.

The results reinforce the perceived effectiveness of pre-roll ads when used in combination with other formats: the multi-format exposure of a pre-roll ad followed by an outstream ad performs equally as well as 2 pre-roll exposures.

The study found that mid-roll ads feel most intrusive, but consumers were less likely to want to close out the ad immediately compared to the newer outstream format.

Mid-roll ranked higher in message recall for desktop viewers at 27%, compared to 8% for outstream.

Outstream is rated much more positively among viewers who complete a video, indicating targeting is key, according to the research.  When consumers completed an outstream video, they were about 3 times more likely to remember the ad than those that did not complete the video.

Branded content performs particularly well in this format compared to traditional video ads, per the study.

Social video appears to offer a unique environment on mobile, allowing ads to feel the most integrated with the content.  According to the research 67% of viewers agreed that social video on mobile did not disturb their browsing experience compared to 53% who agree for pre-roll.

The study recruited 6,864 users from a representative online panel. The survey directed participants to a media experience of their choosing, where they were able to view a webpage and watch video content based on their interests. Each participant was randomized into a test cell that determined what type of video they saw.

Passive data collection took place during the ad experience, such as completion rates and time in view.  Afterwards, participants completed a survey that measured traditional branding metrics and qualitative feedback.