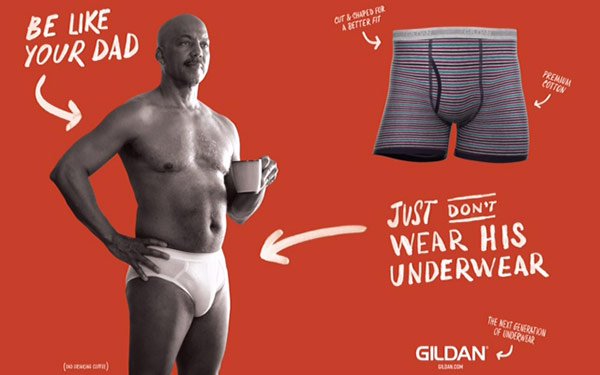 Gildan Activewear is pivoting away from country singer and "The Voice" star Blake Shelton in a new campaign designed by O’Keefe Reinhard & Paul (OKRP) following the agency's AOR appointment last April. Shelton served as a spokesman since 2015.

The “Not Your Dad’s Underwear" creative serves as a call-to-action to capture Millennials by recognizing how younger consumers may admire their fathers, but they want updated and modern boxer briefs.
Chicago media agency Kelly Scott Madison served as the media buying and planning agency for the integrated campaign that encompasses TV, digital, radio, and print, including Rolling Stone, The Onion, and Ozy.
A branded digital ad partnership with Tinder will encourage users to "swipe right" for underwear from a photo of dad to one of the son. A social media campaign will support the effort as well.

“Our male consumer has the Millennial mindset and we know that this audience is looking for quality products at a better value. We also know they are looking for new brands that they can make their own, not their parent’s brands,” stated Rob Packard, vice president of marketing for Gildan Brand. “This campaign takes on legacy brands while raising awareness of Gildan’s promise of delivering the next generation of underwear.”

"The Next Generation of Underwear" positioning was developed following research that revealed insights into Gildan’s target Millennial market. It was designed to show a competitive advantage versus the two leading brands in the category in style as well as in value.