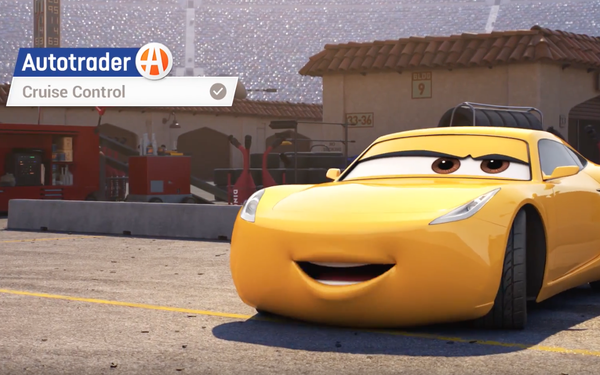 Autotrader is debuting a co-branded commercial tonight during the NBA playoffs that connects the car search company to the Cars movie franchise.

The 30-second spot will run as a promotional effort leading up to the Cars 3 premiere on June 16. It was a creative collaboration between Disney-Pixar, Autotrader and Zambezi, says Jessica Stafford, vice president of marketing for Autotrader.

“As a group, we reviewed several concepts that remained thematically true to our current Autotrader marketing creative, and that incorporated the beloved characters from the Cars franchise,” Stafford tells Marketing Daily. “The final spot was then animated and produced by the same team that worked on the Cars 3 film. We worked with agency partner Assembly on our media plan for the creative rollout and internally with our team to integrate the messaging on our digital platforms.”

The creative will run throughout the 2017 NBA Playoffs on TNT, as well as sports and entertainment programs targeting key demographic groups, such as Millennials, Hispanics and families on HGTV, Bravo and Univision Deportes. For digital, the spot will be supported on Hulu and ESPN Deportes Radio. Cars 3 imagery also will be featured on the Autotrader homepage and mobile app.

Autotrader will host exclusive screenings in select cities for its employees and customers, including dealers and automakers.

“In addition, we will be launching a consumer promotion on Autotrader’s social channels, and sweepstakes for our sales teams across the country,” Stafford says.

While Autotrader has experimented with other entertainment integrations in the past, the collaboration with Disney-Pixar’s Cars 3 is the most significant program activated in the brand’s history, she says.

“The tagline in the co-branded spot was specifically created for this piece of content,” Stafford says. “We’re always looking for ways to naturally integrate with other top brands and get creative with how we connect with car shoppers. We’ve integrated on talk shows and TV programming in the past. With a brand like Autotrader that is integral to such an important decision for consumers, it’s a natural fit into lifestyle programming, when people are shopping for cars.