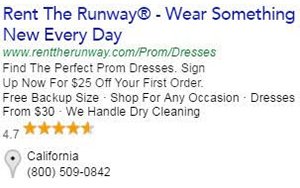 Men have been renting formalwear for years, while women opt to splurge for that special occasion dress. Not anymore. Behavior revealed by clicks on paid search and product listing ads running on Google's search engine show that more women want a statement outfit for a one-time use.

Newcomers like Rent the Runway, which allow women to rent a dress, have moved in to take share from traditional formalwear retail stores, as well as the paid-search advertising category, generating a 9.3% click share on the prom dress category, according to recent data from AdGooroo.

Insights from the data also suggests that JJ’s House, JollyProm, and LuLus are making more of an impact in this category on click share for both paid search and PLAs running across Google's network.

Jim Leichenko, director of marketing at AdGooroo, said the ads are pretty straightforward and to the point. "They're compelling because it allows women to rent a dress for $30 or $40, compared with spending $400 to purchase it," he said.

JollyProm generated 6.6% of clicks and JollyProms.com generated 4.3% of all clicks. These do not appear to be the same sites, but they do have the same content. A third site -- JollyBelle.com, which appears to be owned by the same company as JollyProm and JollyProms -- captured a 1.6% click share. Collectively these sites, which seem to be owned by JollyChic.com, generated 12.5% of all clicks on the prom dress keyword group during the 30-day period.

JJ’s House also led among Google desktop product listing ad (PLA) clicks, capturing 16.8% of all clicks. The next closest advertiser was Lulu’s, with a 6.8% click-share among PLA clicks.

With wedding and prom season arriving, advertisers are upping budgets on product listing ads and keywords in paid search related to "prom dresses." In fact, advertisers spent $541,000 on PLAs running on Google desktops focusing on about 125 prom dress keywords, compared with $487,000 spent on Google desktop text ads, according to recent data.

For paid-search ads during that time, Macy’s and JC Penny’s appeared in the top five advertisers in impression shares, generating 8.7% and 6.7% of impressions, respectively.