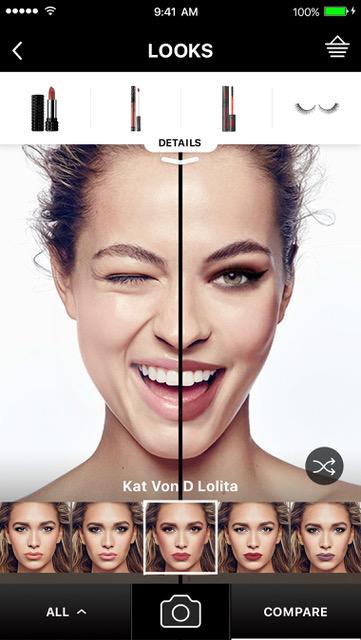 The battle between beauty’s biggest brands is getting increasingly high-tech, with Sephora announcing another expansion of its Virtual Artist app: Now, consumers can try on more than 1,000 cheek colors using uploaded photos, augmented reality and artificial intelligence.

The app, which launched last fall with lip colors and several months ago with eye shadow, now lets users pull all three together, allowing dabblers to generate as many coordinated looks as like — without every having to touch an actual product.

Its ability to keep consumers engaged is helping Sephora flourish, making it a bright spot in an otherwise blah retail landscape. Parent LVMH says its specialty retailing section had a sales gain of 11% in its most recent quarter. And JC Penney, which is rapidly expanding its partnership with the beauty chain, says Sephora remains one of its best performers.

While the Bolingbrook, Illinois-based retailer takes a decidedly lower-tech approach to beauty than Sephora, it benefits from that same eagerness to experiment with as many different beauty brands as possible.

As Sephora continues to dominate in skincare and prestige cosmetics, L2, a New York-based research company that tracks digital performance, reports that Ulta “dominates in hair care and owns 39% of the category’s search results vs. Sephora’s 16%.”

It says it also detects a shift, with hair care brands beginning to favor Ulta over Sephora for distribution.

Consumers can expect that many more tech-driven beauty offerings will come their way. ModiFace, the tech company that worked with Sephora on its Visual Artist, is also the tech power behind Estee Lauder’s recent move to bring AR to all of its online product pages. And earlier this year, Perfect Corp. announced that its YouCam app platform, which includes YouCam Makeup, an app that lets people glam up their selfies, has been downloaded more than 400 million times.

In a typical month, users try on more than 730 million makeup looks.