Ad Creative Tells Cannes: 'No Difference Between Editorial And Advertising' 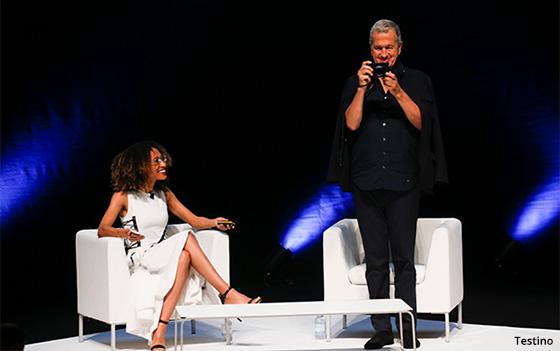 CANNES, FRANCE -- Photographer and creative director Mario Testino has shot iconic campaigns for brands including Gucci, Burberry, Versace, Chanel and Michael Kors as well as with top publishers like Harper Bazaar and Vogue. During a conversation with Teen Vogue's Elaine Welteroth during the Cannes Lions Festival of Creativity today Testino discussed his career and longevity as a creative partner in the fashion world.

"At the end of the day, there is no difference between editorial and advertising," he says. "They are all brands."

Testino channels the role of the client with each project. "As a fashion photographer, we try to present clothes to the customer. The idea of commerce is the basic idea."

Rather than serve as hired help, brands come to Testino to guide their imagery. "When I go to a client, I don't like offering them multiple possibilities. I am very clear about one direction, and I don't think they like having many options."

He attributes his success to listening. "It isn't about me. Most people are used to people throwing their insecurities on them." Take the name away, everyone will recognize his Michael Kors ad, he says.

Living in this youth-crazed culture, Testino advises brands not to question themselves.

"You have to be true to yourself and not follow random things in fashion. There is a certain desperation today that doesn't necessarily need to be true. Whenever things go wrong, fingers point to the essence of the company. They need to believe in themselves," he says.

The 62-year-old still takes part in every step of a project, from pre-production through post-production. "The way I do most things is with a gut feeling," he says. He works alongside a seven-person entourage from 7 a.m. to 10 p.m. six days a week. "The other day is for travel."