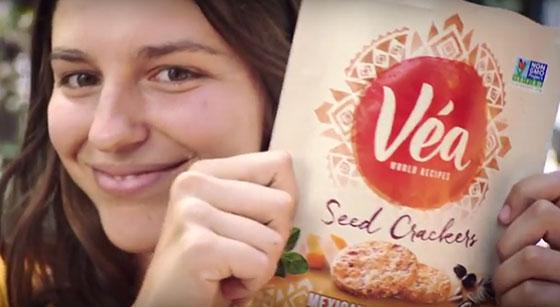 Mondelez International is stepping outside its traditional innovation model to introduce a new snack line called Véa that targets millennials and promotes authenticity. The whole grain product is designed to appeal to the target globally.

The launch is backed by a marketing campaign dubbed “Find Your Real to Real,” which was developed by an agency roster, including McGarryBowen (advertising and digital), Carat (media buying), VaynerMedia (social) and Weber Shandwick (public relations).

A TV spot shows different faces and ingredients from around the world, along with a voiceover discussing "how in the world of crackers, there is now a cracker inspired by the world."

The 360-media strategy includes millennial-focused buys across targeted media partnerships, such as the Mic and Insider, as well as alliances with social influencers who will encourage "their audiences to find their way to real." The TV spot launches today across millennial-focused channels.

Mondelez International has committed to a North American rollout plan for Véa across the U.S. and Canada.  Véa is available in three formats and six different recipes, including Mexican Garden Herb Seed Crackers and Thai Coconut Mini Crunch Bars.