With $22 Million On Hand, GOP Super-PAC Attacks Its Own 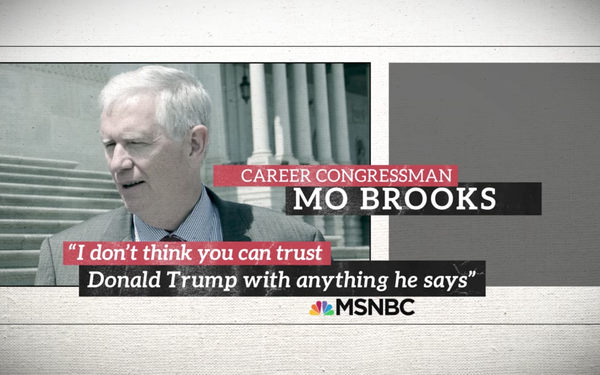 Super-PACs supporting Senate Republicans have raised $17 million in the first six months of 2017.

With $22 million on hand from the GOP-backed Senate Leadership Fund, part of the nonprofit group One Nation, Congressional Republicans are waging war against members of their own party. It is retaliation for negative comments about the president and GOP leadership.

According to Politico, the PAC has already spent millions attacking Brooks, while supporting his opponent Luther Strange, appointed to fill the vacant Senate seat. There will be a primary in August followed by a special election.

This most recent TV ad takes aim at Brooks:

“Based on that spending total, I assume they are planning to air this ad through next Monday, before switching out the creative,” Advertising Analytics told MediaPost's Television Daily News. “That would put the estimated total spending for this ad at about $500k.”

Mo Brooks has faced a barrage of attack ads from the Leadership Fund.

He has been critical of both President Trump and Senate Majority Leader Mitch McConnell, a central player in the super-PAC’s strategy. Brooks has gone so far as to call for the removal of McConnell from his Senate leadership position.

"Mitch McConnell does not like principled conservatives," Brooks told AL.com. "He much prefers a career lobbyist who is pliable to the whims of those who pay the money to finance Mitch McConnell's political operation."

There is an interesting dynamic at play.

Trump rose to office on an anti-establishment wave; at the same time, Brooks is being attacked for standing up to the establishment. Ads have gone so far as to try to connect Brooks to Rep. Nancy Pelosi, the common denominator in Republican hatred of the Democratic Party.

Brooks is short on cash — he will be unable to counter the spending against his candidacy. Sporting 16% in the polls, he is a strong third to interim Sen. Strange and former Alabama Chief Justice Roy Moore, who are polling at 33% and 26%, respectively.