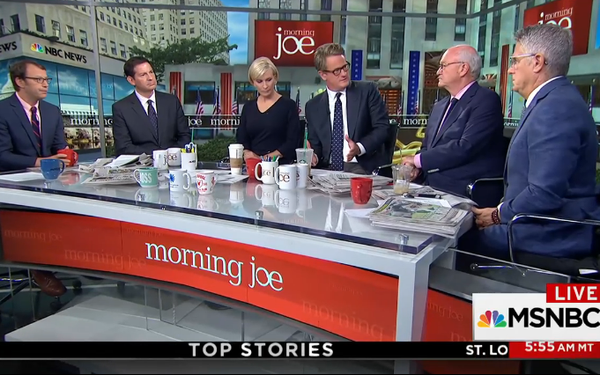 “If the Russians have figured out a way to influence the CBS News with Walter Cronkite..."  began MSNBC “Morning Joe” host Joe Scarborough during a segment this morning, using Cronkite as an analogy for the reach of news Americans get via Facebook.

But he went on to note that it “actually has a greater reach than Cronkite had — over 50% of Americans get their news from Facebook.”

Scarborough's next point was the reason I’m using the “R” word in the headline of this column: “Tell me, at what point does the federal government step in and say, ‘You start handling yourself responsibly or we will step in'?”

If you ask me, I think that point probably should have been in the lead-up to the 2016 presidential election, when Russian active measures, including the distribution of fake news, bots, paid trolls -- and, yes, even paid ads on Facebook -- played a material role in influencing how Americans think, feel and behave.

And also, how they voted.

The most remarkable thing about Facebook’s reluctance to disclose what it knows is that Russia’s active measures are still active, according to counterintelligence experts, including the country's use of Facebook, Twitter and a wide variety of other digital media platforms.

Facebook’s tepid disclosure last week that Russian operatives placed thousands of paid ads on the social network doesn’t go far enough, if you buy Scarborough’s point that it’s not longer just a “social network,” but now a news broadcaster on the scale of CBS News in its heyday. Bigger even. Then it should fall under the same regulatory oversight.

One reason why digital media platforms like Facebook, Twitter, Google and others have not been regulated as tightly as broadcast media is they have historically been defined by the same standards as telecommunications services intended to convey peer-to-peer information. That's not the kind of massive reach broadcasters have historically had.

The irony, as Scarborough points out, is the roles have been flipped. But regulations have not.

The other irony is that broadcasters still hold themselves to higher standards of public accountability than digital media platforms that are magnitudes of reach bigger than they are now.

“The really scary thing is that if I want to do a commercial for laundry detergent on ABC, what I have to go through vs. anything on Facebook, which has a multiple -- 100 times -- reach, and there is none of that,” ad man and MSNBC contributor Donny Deutsch said.

He alluded to the so-called “standards and practices” broadcast networks and stations still maintain in regards to vetting advertising and other content that go across their airwaves.

As Facebook’s disclosure last week reveals, the social network maintains nothing like that. Further, in an equally embarrassing disclosure broken in a subsequent expose by an investigative journalism team at ProPublica, unbeknownst to Facebook itself, its ad targeting algorithms had created a means of targeting people who were “Jew haters.”

It’s not just Facebook that needs to be regulated, but any digital media of scale that are responsible for disseminating the news that Americans consume to keep themselves informed. That means Twitter, Google/YouTube, Reddit, etc.

A study released last week by the Pew Research Center found two-thirds of Americans now get at least some of their news from these digital media platforms.

In other words, it is now as important -- if not more important -- that digital sources of news are held to the same standards as broadcasters, because as the past year has demonstrated, it’s not just about being “fair and balanced,” it’s the fact that unsavory sources could be using them to manipulate what informs how Americans think, feel and behave.

It’s time we wake up and take control of that threat.

When we realized how terrorist groups like Al-Qaeda could use our own tools of transportation and commerce -- the commercial airline industry -- as weapons of mass destruction against us, we took action. Some might feel too much so. But why aren’t we taking action now?

Counterintelligence experts describe Russia’s use of social media and the dissemination of disinformation as a form of “hybrid warfare.”

Asked what he is most interested in reporting on next, Rutenberg said: “I’m still astounded that Facebook has said, ‘We’ve found these Russian ads, but we’re not going to tell you all that much about them.’ Can you imagine? We used to spend so much time on any shadowy ad on television. It would consume our political journalism. I’m shocked about how little information we still have about that campaign.”