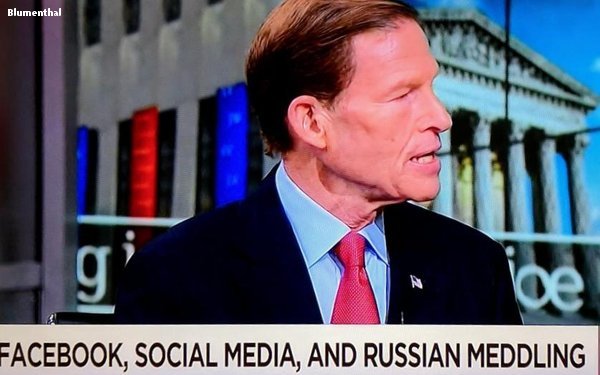 That’s right, weapon of mass destruction. Hear me out.

If there’s anything 9/11 taught us, it’s that the most insidious weapons are the ones we hand freely to our enemies. Al Qaeda ingeniously figured out how to turn our own friendly skies against us.

Now Russian operatives have figured out how to turn our marketplace into a WMD against us.

The destruction hasn’t been as immediate as watching American jets crumble America’s buildings from the outside in. That’s because this type of WMD works slowly, sowing instability that crumbles us from within.

Russia used -- and continues to use -- our digital media marketplace as a weapon in what the intel community calls “hybrid warfare.”

It works by leveraging “active measures” -- in this case, the programmatic media-buying marketplace -- to cost-effectively spread disinformation, confusion and conflict that literally destroy us from within.

Counterintelligence experts have known Russians were doing this for years.

Listen to the testimony of Clinton Watts, a former FBI agent who was part of a team that began investigating how Al Qaeda and ISIS were using digital media platforms like Facebook, Twitter and Google to recruit. Along the way, he testified, U.S. intelligence discovered Russia’s active media-buying measures.

We all sort of understood something was going on, but it happened in a blur -- James Comey’s testimony about Russia hacking the election, the spread of “fake news," etc. -- and our attention was quickly diverted to other parts of the news cycle, including the “Access Hollywood” tapes, Hillary’s emails, the fall and subsequent rise of Donald Trump.

We wouldn’t be talking about this now if it weren’t for Robert Mueller’s investigation into Facebook’s role, the social network’s own begrudging admission, and the Senate Intelligence Committee’s revelations about just how cost-efficient Russia’s active measures have been.

Operatives directed by Russia’s Internet Research Agency spent $100,000 to serve 3,000 ads to 10 million Americans at a $10 CPM, which was magnified by hundreds of fake Facebook pages and profiles linked to the IRA.

This morning, The Washington Post broke a story revealing Russia has also spent “tens of thousands of dollars” on placing ads to “spread disinformation across Google’s many products,” including YouTube, search, Gmail, and across the DoubleClick ad network.

To me the big revelation isn’t that Russian strategists have done that, but how they figured out how to cost-effectively turn our own marketplace into a WMD against us -- and that so far, there's little we could have done about it.

“If Vladimir Putin is using Facebook or Google or Twitter to, in effect, destroy our democracy, the American people should know about it,” Senator Richard Blumenthal (D-Connecticut) said this morning on MSNBC’s “Morning Joe.”

Blumenthal said he was among the senators leading a measure that would require Facebook -- and presumably others -- to disclose when “Russians are paying for this -- coming to you straight from Vladimir Putin as part of a campaign to sow discord, to undermine our democracy.”

That seems right to me, especially given what an influential platform Facebook has become for Americans accessing news, fake or otherwise. And Facebook has acknowledged as much in the past few weeks.

But it’s not just Facebook. Or even just Google and Twitter. We need to get a better handle on how Russian active measures are using our marketplace against us in ways we may not normally look at.

I was struck during MediaPost’s Marketing: Politics conference in January when Revolution Messaging’s Jenn Kauffman said her team knew Trump would win because they were tracking voter sentiment on less well-lit digital communities like 4chan and Reddit.

While overlooked by mainstream media, Congress and federal investigators, Reddit is particularly influential in political messaging, Kauffman said. In fact, that’s where her team got the “Feel The Bern” tagline for Bernie Sander’s Presidential campaign. She said her team could predict the outcome of the general election by monitoring pro-Trump sentiment on sub-Reddits of anonymized users who spoke more accurately about their voting intent than most national polling indicated.

“If you went on Reddit, you could see there was so much vitriol against the establishment,” she recalled.

The Senate measure wouldn’t stop that, because sub-Reddits aren't advertising, but it would at least create some transparency about the role paid persuasion is playing in the programmatic media-buying marketplace. And that’s a step in the right direction.

It would be even better if our industry was more self-regulated. If Facebook didn't get dragged, kicking and screaming, to federal investigators to create transparency -- along with Google, Twitter and the rest of the programmatic marketplace.

“Until we get a firm basis on fact and fiction in our own country… we’re going to have a big problem,” Watts said during his Senate testimony on March 30. “I can tell you right now -- today -- grey outlets that are Soviet-pushing accounts tweet at President Trump during high volumes when they know he’s online and they push conspiracy theories. If he is to click on one of those or cite one of those, it just proves Putin correct: That [they] can use this as a lever against the Americans.”