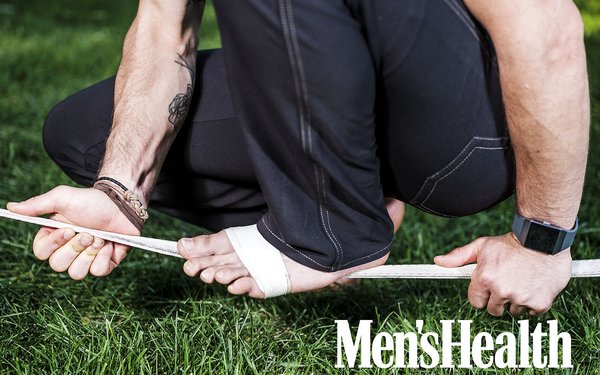 Men’s Health has partnered with Fitbit on a three-part series called “The Adventurist.” Writer Clint Carter is tasked with attempting to master three extreme sports in five days, working with experts in the field.

Carter wears the new Fitbit Ionic smartwatch throughout the series to track his heart rate and steps.

For the first challenge, Carter trains to cross a slackline known as a highline (a slackline set high above the ground) between two Colorado cliffs, suspended 60 feet in the air.

"The Adventurist" series will run across the print magazine of Men’s Health, a Rodale Inc. brand, as well as in digital long-form articles, short documentary videos and social media.

The first installment online features photography, a 12-minute film, an article and gifs. A four-page feature on Carter's challenge appears in the November 2017 issue of Men's Health, which hits newsstands October 17.

“When [Bean] came on board last October… he wanted to put a fresh coat of paint on Men’s Health. Part of that is bringing the outdoors to the forefront. Use the gym as a means to enjoy portions of your life even more, rather than the gym be your destination,” Peel said.

The July/August issue was the first “outdoor adventure” issue of Men’s Health. Every photo was shot outdoors.

For “The Adventurist,” Men’s Health brought the idea to Fitbit, rather than the client coming to the publication with a concept. “This was a program we wanted to do, but we wanted to do it in a big way. In order to accomplish that, a partner was necessary,” Peel said.

Peel called this the distinction between “cobranded content,” which he defines as “ad partner integration into an editorial piece or franchise or program,” and native content, which “takes edit out of the equation.” He noted Fitbit did not have any direct involvement in the editorial, though Men’s Health did run all the adventure ideas it proposed after approval from the edit team.

One of the reasons the magazine wanted to make the series cross-platforms was due to its “largely unduplicated audiences” across print, social and online.

“You can’t afford to neglect any of those audiences with such a key program. We created the content from every angle — this was not from a video-first or print-first or social-first. It was all of those things. We had a video team on site and print photographers on site,” Peel said.

A print ad for the Fitbit Ionic will be displayed in the November and December issues, while a variety of digital ad units will be created for desktop and mobile.

Coverage of the second installment, which will have Carter learning to Olympic-style ski jump in Utah, will be published on MensHealth.com on November 1 and in the December print issue.

The third installment, where Carter learns to race and do tricks on a BMX bike, will be revealed on the magazine's site December 1, though Peel said the final challenge is subject to change.

If these adventures sound borderline insane, Peel said Carter was more than up to the challenge.

“He needed [no convincing]. In fact, in a lot of ways, it's our job to pull him back a little bit … He brings ideas to us, and we are saying 'That’s cool.' Or sometimes, 'No way in hell we are doing that, not on our watch,'” Peel laughed.