Yet Another Study Validates Supremacy Of Super Bowl Ads, This One's About Traffic 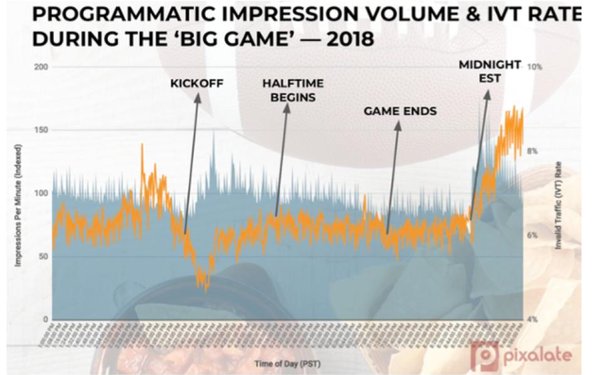 In what could be described as an anti-inflation-gate story, it turns out that the Super Bowl inflates its digital audience impressions far less than other major NFL games -- at least insofar as invalid traffic associated with programmatic advertising buys around the Big Game goes.

A report released late Thursday by Pixalate finds that invalid traffic was “notably lower” for the majority of Super Bowl Sunday than compared with other NFL playoff game days this season.

The difference isn’t huge -- about 1% lower levels of invalid traffic -- but it’s an indicator that the Super Bowl is the ad world’s premium event in yet another regard.

The analysis also reveals that mobile activity dominated just after kickoff and that its volume nearly doubled vs. desktop at the peak of the game.

Usage among all devices -- smartphones, tablets and desktop -- rose notably after kickoff, and there was no significant change during half-time.

The report concludes that smartphones are the smartest strategy for programmatic marketers targeting users during Super Sunday.