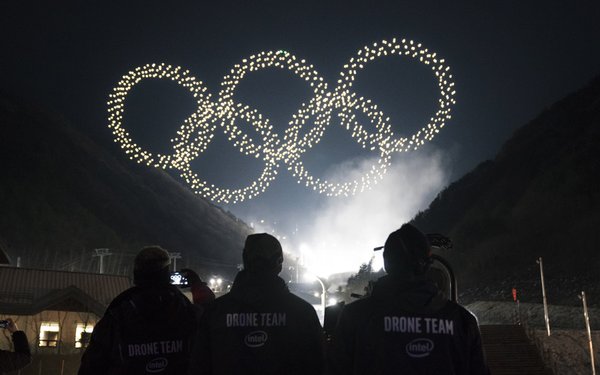 Viewers of the opening ceremony at the Olympics got a new view of the evolution of drones.

Intel used more than 1,200 Shooting Star drones in a first-ever drone light show that also set a Guinness World Record for the most unmanned aerial vehicles airborne simultaneously, according to the company.

The world record flight shown on TV was actually pre-recorded for the event in December.

The drone light show included the formation of the Olympic rings, animations of different sports and various Olympic-related logos.

This surpassed Intel’s previous record of 500 drones flown simultaneously in Germany in 2016. Intel also previously partnered with Disney for a 300-drone light show at Disney World in Orlando.

“The Olympics are a time when the sports and entertainment industries are buzzing with record-setting performances, so it was the perfect stage for Intel Shooting Star drones and our team to set their own kind of record,” stated Natalie Cheung, general manager of Intel’s drone light show team.

The drones, which each weigh slightly more than a volleyball, are equipped with LED lights that can be programmed for animation and create more than 4 billion color combinations in the sky.

The drones are made with a frame of flexible plastic and foam. The entire fleet is controlled by one pilot and one computer.