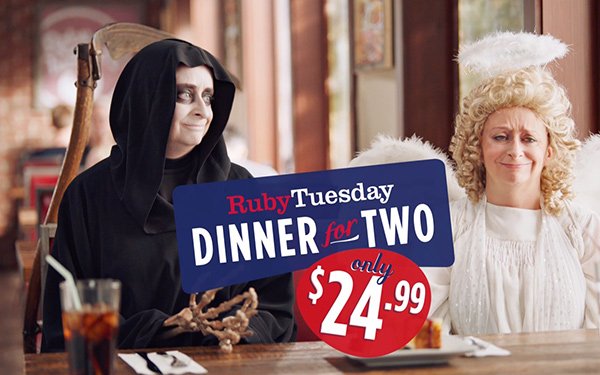 Ruby Tuesday is introducing its first campaign since being acquired by private-equity shop NRD Capital in December.

With this new ownership and a renewed investment in building the brand, Ruby Tuesday’s new TV spot stars "Saturday Night Live" veteran Rachel Dratch playing all six roles in three pairs of polar opposite characters — including cheerleader and Goth girl, Grim Reaper and angel, hockey player and figure skater — to convey the message that Ruby Tuesday’s new $24.99 dinner-for-two deal is so good it can bring anyone “two-gether."

This is the first time the restaurant chain has used a celebrity in its advertisements.

The 15- and 30-second spots, developed with MARC USA's Chicago office, targets adults ages 25-54 across networks such as A&E, CNN, HGTV, APL, ION and Spike, as well as online.

See some of the work here and here.

The media strategy is designed to reach a broader audience beyond its core guests.

“TV is very effective for us in building awareness of our seasonal promotions and driving traffic," says Dave Skena, CMO, Ruby Tuesday. "We wanted to break through and stand out from what you typically see in the casual-dining category and deliver on Ruby Tuesday’s promise of honest food, warm welcomes and healthy helping of hospitality.”