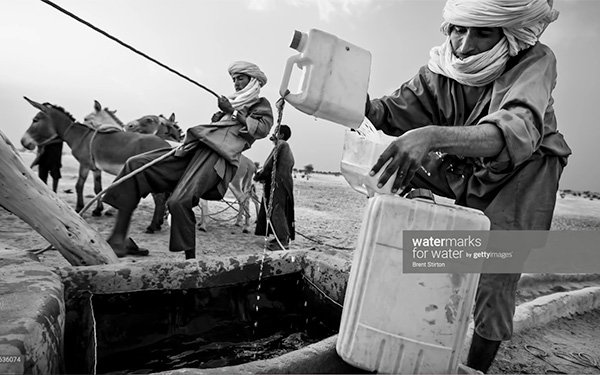 Getty Images is leveraging its talent network to help raise awareness for the global water crisis, and FCB Chicago is pitching in to help spread the word with pro bono campaign called “Watermarks For Water.”

More than 300 images from Getty’s talent pool have been archived at a microsite that illustrate the issues around clean drinking water.

Each time an image from the collection is officially licensed, the iconic Getty watermark is removed and the photo agency donates 10% of proceeds to the nonprofit charity: water, an organization that brings clean and safe drinking water to people in developing countries.

From the microsite, people will have the option to either license an image or share it on social media. Each image shared socially will retain its watermark (as opposed to those licensed outright), along with a compelling fact about challenges surrounding clean drinking water.

This started as a “passion project” at FCB Chicago, which then partnered with Getty.

In 2015, Getty Images was a founding partner of the United Nations’ Global Goals campaign, a set of 17 ambitious targets with the aim of ending poverty, fighting inequality and tackling climate change by 2030.

“One of the things that struck us the most when working with Getty Images on this campaign is that more people die from drinking impure water than from war," says Liz Taylor, Chief Creative Officer, FCB Chicago. "That insight led us to take one of Getty Images’ most recognizable assets — the watermark — and flip the idea on its head.

"What if, by removing watermarks, we could start a global movement to bring clean water to those around the world who lack it?”

To coincide with the campaign's launch on World Day, March 22, Getty Images is dedicating its first homepage takeover to this cause and introducing a film that explores how the power of photography can transform the world.