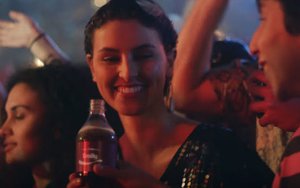 For the fifth U.S. iteration of its popular summer Share A Coke marketing campaign, the Coca-Cola Company is emphasizing a “shared experiences” theme by introducing a sweeps element and “Share Chair” experience.

The core premise of “personalized” labels remains, of course: More than 1,100 first and last names have been printed on 20-oz. bottles of Coca-Cola, Diet Coke,  Zero Sugar,  Life, Cherry Coke, Vanilla Coke and Cherry Coke Zero. In addition, some packages of Coke, Coke Life and Coke Zero will bear phrases like “La Familia,” “A Champion,” “My Best Friend,” “An MVP” and “Your Squad.” Limited-edition patriotic packaging is also back.

But this year, the name labels are peel-off stickers, with Coca-Cola Sip & Scan codes underneath. The codes can be used to unlock chances to win instant prizes — including shared activities like baseball tickets and amusement park passes, as well as items like a free Coke.

The name stickers can also be peeled off and stuck to clothing, phones or other items.

Coca-Cola’s Share Chair — an oversized armchair that doubles as a shareable vending machine — will make appearances at major summer events, including the BET Experience in L.A., Special Olympics USA games and the Major League Baseball All Star Game in Washington, D.C.

When two people sit together, personalized mini cans of  and Coke Zero Sugar are vended through the chair’s arms, and a camera takes a snap and a video that can be shared on social media.

“This year, we’re focusing on the role  plays in the special summer moments we share with others,” Jaideep Kibe, vice president,  Trademark,  North America told Coca-Cola Journey. “We wanted to tap into the meaning behind shared experiences more so than just names.”

The campaign — which aligns with the broader “Coke for Everyone” platform launched this year — includes television (below), radio, outdoor and cinema advertising, social and digital media, and experiential elements.

“Share a Coke” — a concept whose novelty drove social media snaps sharing and significant sales lifts from the start — debuted in Australia in 2011, and in the U.S. in 2014.