The Green Giant Is Coming To Times Square 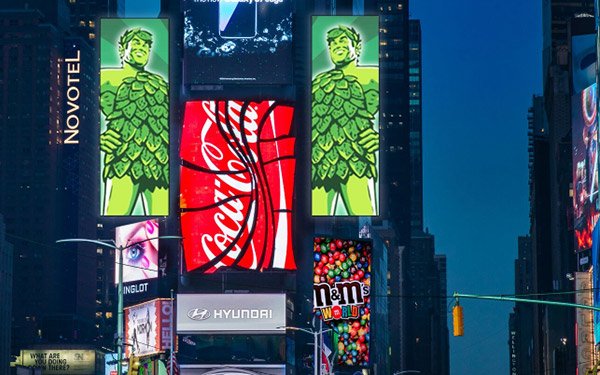 The Green Giant, the iconic vegetable brand that is now part of B&G Foods, is taking over some prime real estate in New York’s Times Square.

Sherwood Outdoor, which owns the twin “goal post” signs at 1600 Broadway has constructed new 35-by-95 foot LED displays that will feature the Green Giant as well as new products offered by the brand.

The LED displays replace the vinyl-style signs that had featured Budweiser since 2006. The new Green Giant signs are surrounded by other iconic brands that have been featured for decades at 2 Times Square, including Coca-Cola, Samsung and Prudential.

According to the Times Square Alliance, this area has some of the heaviest foot traffic in all of New York City with 135 million pedestrians every year. A recent report by the organization found that the median time spent in Times Square is 81 minutes, with 8 minutes spent looking at billboards. Additionally, 243,358 people in Times Square post about their experience in Times Square on social media each day.

Greenberg said that the firm intends to deploy “a wealth of interactive and visually appealing videos and ads” on the displays, featuring the Green Giant character and products including its line of Veggie Swap-Ins and Green Giant Mashed Cauliflower. The billboards will also be used to help with future product launches.