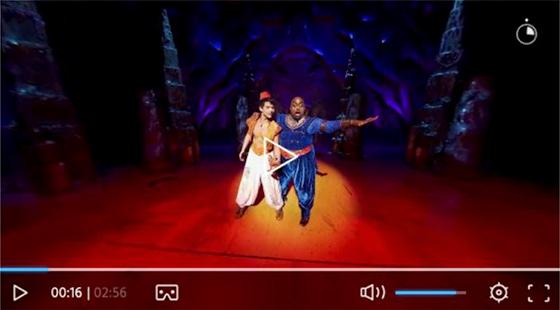 A 360-degree video ad campaign has been launched to promote Disney’s musical Aladdin on Broadway.

The ad, created by Disney and its agency Serino Coyne, places viewers on stage with Aladdin and the Genie during one of the show’s top musical numbers Friends Like Me.

Digital overlays of text that share facts about the show are placed around the video sphere as Genie and Aladdin sing and dance. For example, a viewer can move the video down to see the orchestra in the pit below the stage.

“Disney’s 360 experience is among the most smartly produced 360 content we’ve seen in the market, taking full advantage of the content format and adds in digital flourishes that render for a magical experience,” stated Brad Phaisan, CEO of OmniVirt, the VR/AR ad platform used to the video ad.

Disney also embedded the 360 experience on its website using the VR player. This follows a similar implementation Disney used for The Lion King website.