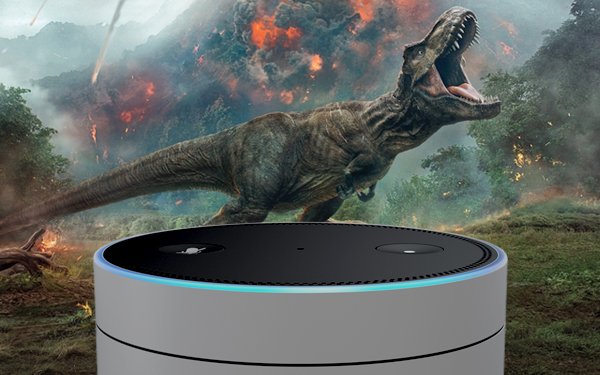 Marketers are becoming more innovative in how they get consumers to interact with smart home speakers.

As a promo for “Jurassic World: Fallen Kingdom,” the projected blockbuster movie opening this weekend, an interactive “Jurassic Park Revealed” is being released for Amazon's line of smart home speakers and on Android or iOS via the Alexa app.

The interactive audio adventure was created by Universal and Earplay and I’ve been trying out an early test version, finding it to be quite fun.

After saying “Alexa, visit Jurassic World,” the story begins with a guide taking the listener through Jurassic Park, set during the events of the movie timeline. The host periodically asks questions of the listener, such as “do you want to carry the binoculars or the candy bar?” or “should we take the dart out of the dinosaur -- yes or no?”

Alexa remains live, awaiting an answer, and the story proceeds down a path based on which answer is given. As a result, the listener is more likely to pay close attention to the story. The story can be stopped at any time and resumed in place later.

The Jurassic audio adventure is in six chapters, comprising more than an hour of listening beginning to end. The first chapter is free and then the listener can purchase the time for the rest, $4 for a limited time, with $1 discount for Amazon Prime members.

Movies are not alone in bringing more creative interactivity to smart speakers.

HBO just launched “Westworld: The Maze,” a short game for fans of Westworld who have an Amazon Alexa device they can interact with. Fans have to answer hosts’ questions about places, events and people to advance. The key phrase to get started is “Alexa, open Westworld.”

Aside from the promotional value for movies or TV shows, the personal, interactive approach starts to show some of what’s ahead for smart speakers.