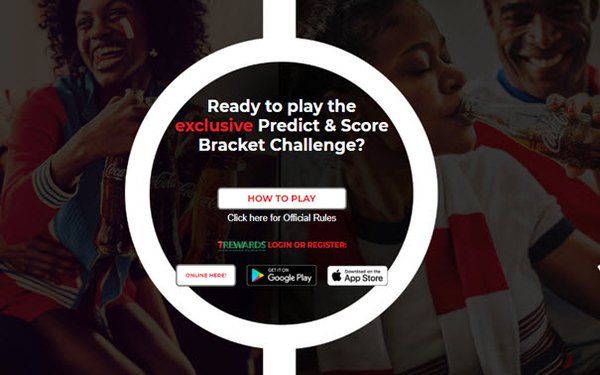 Coca-Cola brands and 7-Eleven have teamed for the second time on a promotion around the World Cup tournament.

This time, the partnership features a “Predict A Score” game and sweepstakes requiring use of the convenience store retailer’s 7Rewards customer loyalty mobile app.

With more than 61,000 7-Eleven stores in 14 countries participating — including 9,100 stores in the U.S. — the promotion is the largest in the retailer’s history. It’s also the latest in a series of pushes to build its 7Rewards membership and use of its mobile app.

Players can earn 7Rewards points redeemable for select items at participating 7-Elevens, plus chances to win contest prizes and a sweepstakes prize of $50,000.

For Coca-Cola, which has been sponsoring the FIFA games since 1978, the promotion is one of a score of sales-boosting efforts tied to the tournament.

Specially marked "Share a Coke" cans at participating 7-Elevens have unique codes under their tabs that can be used to play the "Predict and Score" game in the retailer’s loyalty app.

Powerade product purchasers can have their 7-Eleven app scanned at checkout to receive an email with a code to play.

Each week through July 15, a bracket featuring upcoming games and teams will appear in the 7-Eleven app. Each time 7Rewards members choose their picks to win in a given week, they earn 10 points, plus five points for each correct prediction. Only one game code may be entered per week.

Players who predict correctly can also move up the leaderboard after each week's winning soccer teams are determined. The four players at the top of the leaderboard when the championship game concludes on July 15 will win prizes that include a $2,000 Delta Vacations gift card, $1,000 and $600 Best Buy gift cards, and a year-long sports streaming package.

The next five players in the ranking will receive 10,000 7Rewards points. Thousands of 7Rewards points will be awarded to the balance of the top 300 players.

All game winners and eligible entrants will be entered into the sweepstakes, which continues through Aug. 31.

Outside of the game and sweeps, the partners are promoting a red selfie bottle cap adaptor, available at participating 7-Eleven stores. The adaptor turns 20-ounce Coca-Cola products into extenders for taking selfies.