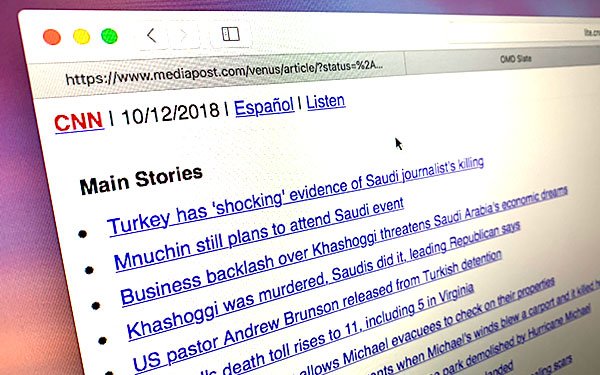 CNN Digital, the website of the television news channel, promoted a special version of the site for those impacted by Hurricanes Florence and Michael.

CNN created a “lite” version of the main home page in English and Spanish during Hurricane Irma in 2017, designed for people with weak cell phone connections.

“We wondered if CNN could keep our audience in the hurricane’s path informed, not only about the hurricane but with news around the world,” Amy Cox, executive editor of CNN Digital, told Publishers Daily.

Those in hurricane areas can stay up to date with the latest storm tracker and related news from CNN, using the stripped-down site free of graphics and images that loads much faster than the usual main home page.

CNN used geotargeting to serve audiences in Florida and nearby areas a version of the CNN.com home page with news about Hurricane Michael.

The audience development team and editors at CNN have geotargeted content “more frequently” in the past year, Cox said, especially during weather-related breaking news. For example, CNN will serve more “how to prepare” and related content for those in a storm’s path, via CNN’s mobile web.

“We’ve also experimented with our global audiences, by geotargeting India news to parts of India on the mobile platforms,” Cox said.

The lite CNN.com “is meant as a goodwill/public service gesture for audiences in low-bandwidth areas and is fed by what editors are already programming in the CNN app,” Cox added. It was also used as part of CNN’s coverage in other natural disasters, such as winter storms, flooding and earthquakes in Mexico.

The site is promoted in banners, for people trying to load the regular site. It is also pushed on social — especially on CNN’s Twitter accounts — and in CNN’s breaking news mobile alerts.