'theSkimm' Ad Lists 3,000 People Committed To Vote In The Midterms 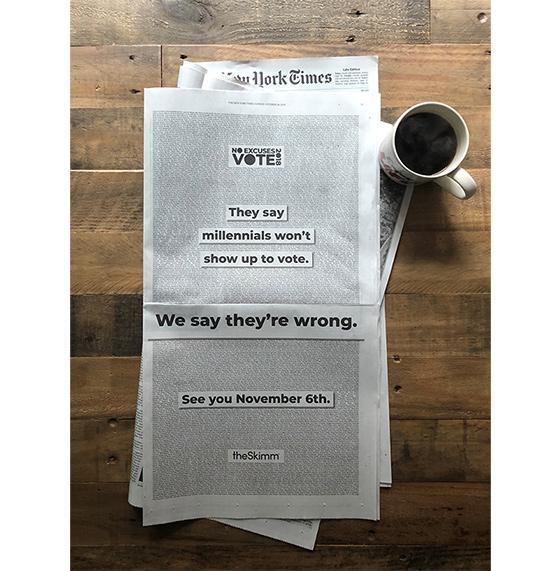 theSkimm took out a full-page ad in The New York Times’ Sunday paper, with the names of 3,000 people who have committed to vote in this year’s midterm elections.

“They say millennials won’t show up to vote. We say they’re wrong,” the advertisement reads. “See you November 6th.”

The ad is part of theSkimm’s “No Excuses” campaign, a nonpartisan initiative created in 2016 to get people to the polls. This year, the campaign aimed to get 100,000 people to pledge to vote in this year's midterm elections.

“We took out a full-page ad in @nytimes that includes 3,000 names of Skimm'rs who were the first to commit to vote in this year's midterms. Would have loved to include everyone ... but space,” theSkimm posted to social media, with a photo of the ad.

The posts then ask readers to click to pledge to vote.

With a week left until the elections, theSkimm says it has reached its goal, and over 100,000 people have committed to vote on November 6.

theSkimm — known for publishing a free morning newsletter for millennial women — got over 110,000 of theSkimm’s audience registered to vote in 2016; 95,000 of them were women.

In addition to The New York Times ad, theSkimm designed and placed billboards in highly trafficked areas across the country, leading up to this year's election. This is the first time theSkimm has invested in out-of-home advertising with the goal of getting people to vote, a spokesperson told Publishers Daily.

Largely focused on locations that have competitive midterm races (such as Phoenix, Dallas, Houston, San Antonio, Miami, Jacksonville and Orlando), the billboards have simple messages: “November 6th. Be there” or “Get to the polls,” as well as others targeted to voter turnout rates in specific states, per the spokesperson.

Animated projections are set to light up New York and Chicago for three days each this week.

Earlier this month, in a partnership with Shondaland, a five-part video series created for "No Excuses" debuted across both outlets.

The video series features stars from Shondaland’s TV shows, such as "Grey’s Anatomy" and "How to Get Away with Murder."

The “No Excuses” campaign provides primers on this year’s key races and candidates, registration status checks and the ability to register to vote, as well as a polling place locator and a feature to build your ballot.

“theSkimm’s mission is to make it easier for female millennials to live a smarter life. A huge part of living a smarter life is being an engaged citizen and exercising your right to vote,” Carly Zakin and Danielle Weisberg, cofounders-co-CEOS of theSkimm, wrote in a blog post in September.

“We want Skimm’rs to feel empowered to make the decision that is right for them. We aren’t going to ask you your party affiliation, which candidate you like, or where you come down on issues. We just want you to vote,” the cofounders added.