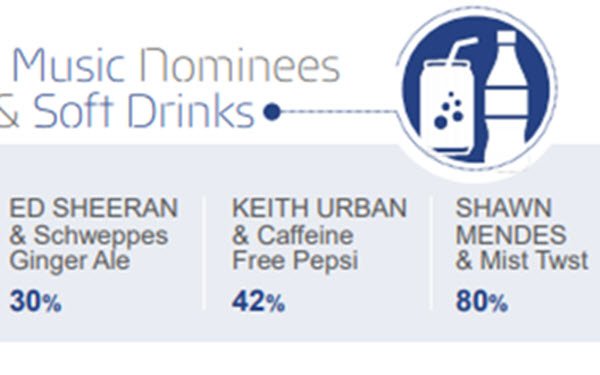 With the annual People’s Choice Awards coming up on Sunday, Gfk MRI and E-Poll Market Research are using the event to promote their data-based MRI/E-Score platform for making solid matches between brands and celebrity endorsers.

The examples of correlations between this year’s nominees and brands in various categories are intriguing.

Looking at food and beverages, fans of actor Freddie Highmore (“Finding Neverland,” “Bates Motel”) are 59% more likely than the average consumer to have eaten Herr’s potato chips in the past six months, while those who dig “Grey’s Anatomy”'s Justin Chambers tend to favor Utz.

In music, the analysis revealed alignment between Shawn Mendes and Mist Twst, with the singer’s fans being 80% more likely (index of 180) to say they drink the beverage than the average consumer.

The researchers also paired female movie stars with cars, and came up with links between Anne Hathaway and Saab (127 index); Lily James and Nissan (133); Sandra Bullock and Porsche (115) and Scarlett Johansson and Volvo (28%).

And in an even more offbeat analysis, they found these connections between country music nominees and insurance brands: Keith Urban and AARP (136); Carrie Underwood and AARP (119); Luke Bryan and Farmers Insurance (114) and Blake Shelton and The Hartford (112).