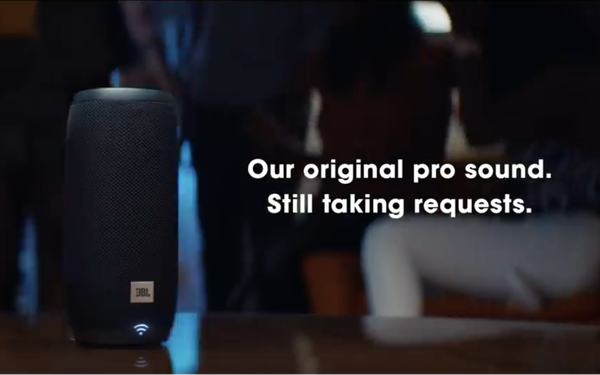 What a long, strange trip it's been — in the world of stereo-speaker technology, that is.

The commercial shows the evolution of a speaker, and how far JBL has come since Woodstock.

For over 70 years, the company has established itself as a leader in the industry, says Ralph Santana, CMO of Harman.

“The new ad gives viewers a glimpse into the heritage and expertise of JBL, and the unifying power of amazing music and sound—whether at an iconic concert, a recording studio, or in your own home,” Santana tells Marketing Daily.

The brand is also throwing it’s first-ever JBL Requestmas: an exclusive holiday event with performances by a surprise hip-hop group that was big in the 1980s and 1990s and pop singer Andy Grammer on Nov. 15, open to media and VIPs only, as well as a consumer-facing pop-up shop throughout the rest of the weekend (Nov. 16-18) at the Harman store on Madison Avenue in New York.

The pop-up will have exclusive access to a giant “gift-giving” JBL Link Speaker, along with a listening booth with some of JBL’s most popular speakers, photo ops, stenciled foam art, hot chocolate and gifts.

Street teams poised at the Time Square and Grand Central stations will provide additional details on the activation.