Poised For A Happy Holiday: Key Takeaways From Black Friday And Cyber Monday

The numbers are in, and the data from Black Friday and Cyber Monday suggest that the 2018 holiday season is likely to be a happy one for brands and retailers.

For this analysis, we examined petabytes of data about consumer digital behavior in the U.S. for a critical six-day period -- from Thanksgiving Day through the Tuesday following Cyber Monday. We further honed in on seven key categories at the heart of holiday shopping and gift giving: electronics, appliances, home, toys/games, beauty, sports/outdoors, and jewelry/accessories. The data included nearly 50 million digital transactions, and the results suggest strong growth rates compared to last year, and significant opportunities for digitally savvy brands.

Four of our key takeaways are highlighted below.

1.  Brands and retailers are poised for a happy holiday season. As the 2018 holiday shopping season kicked off, we found indicators of consumer spending and sentiment to be generally positive. For example, the total number of digital transactions in these seven categories rose 4.5% from their 2017 numbers, to nearly 48 million transactions.

This 4.5% growth rate is consistent with the National Retail Federation’s prediction that overall holiday sales (online and offline) this year would be 4.3% to 4.8% above 2017. 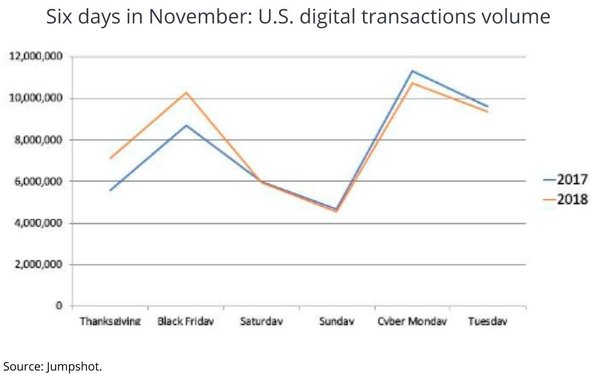 3.  As the “holiday spending pie” continues to grow, there is room for multiple winners. It comes as no surprise that Amazon’s holiday season got off to a good start – with 41.1 million transactions over the six-day period (across all categories), up nearly 12% from 2017.

But Amazon wasn’t alone in getting off to a strong holiday start; this year’s growing holiday spending is, in a sense, a rising tide that lifts many boats. Compared to last year, the number of digital transactions rose for Walmart (15%), Target (63%) and Kohls (28%). In fact, Amazon’s share of transactions among five of the largest retailers actually fell slightly, although to a still lofty 75%, but down from about 90% earlier in the month.

4.  The intersection of home and technology remains hot. Among the seven categories examined, electronics was the largest in terms of the volume of digital transactions (approximately 14 million, up 5%). The appliance category saw the highest growth rate (up 20 percent) – Amazon (up 29%) is the largest player in the appliance category by volume, but it is worth noting the 60+ percent (!) gains in appliance sales by Walmart, Home Depot, Lowes and Target.

Looking more specifically at top products, Amazon unsurprisingly has many at the top of the list, led by Echo Dots and Fire Sticks and other members of the extended Alexa family. Instant Pots may seem so 2016, but they continue selling well, as do memory cards, Playstation Plus subscriptions, and AncestryDNA kits.  Categories not selling as strongly as last year include sporting, fitness and outdoor gear as well jewelry/accessories, which saw 10% and 6% decreases, respectively.

In the final analysis, the data paints an encouraging portrait of today’s consumer marketplace -- digital transactions are up significantly, across a range of categories, and across a range of retailers. These early results suggest that the holiday season is poised to be a happy one for brands and retailers.