About 170,000 anti-Semitic Google searches are made in the UK annually, and 10% of them include phrases such as “Jews must die” or “kill Jews,” according to research released Friday.

The report -- Hidden Hate: What Google searches tell us about antisemitism today, released by the Community Security Trust and AntiSemitism Policy Trust -- concludes that many of the searches include queries with phrases that mock Jewish people.

About 10% of these searches include violent language or intentions, and “evil” and “racist” are the negative terms most commonly searched in connection with Jews. These types of queries spike late at night, between the hours of 2 a.m. and 3 a.m.

'We partner with organisations in the UK who work to tackle hate speech including CST and Stop Hate UK," said a Google spokesperson. "Autocomplete helps you get to the information you are looking for as quickly as possible. For certain issues, including hateful predictions against groups and individuals based on religion we have developed policies to exclude such terms."

The findings are based on Google search data gathered in the United Kingdom since 2004, and are based on the IP address, cell phone location, or other information.

Taking a deeper look at all searches done during that time frame, the researchers found that nearly all searches begin with “I want to kill” or “how to kill.” The majority of searches that begin with these phrases reveal suicidal thoughts, but most searches express violent thoughts toward others.

Jews are the fourth-most frequent subject of searches for offensive jokes online in the United Kingdom, behind obese people, black people and gay people.

The report also notes that after Google removed the phrase “Are Jews evil?” from its auto-complete function in December 2016, 10% fewer people searched for “Are Jews evil?” than had done so in the previous year.

Another interesting finding is that Google searches containing the word “Jewish” tend not to be anti-Semitic, whereas searches with the abbreviation “Jew” do.

Location also plays a major role. Anti-Semitic searches are most common in Wales -- about 7.2% above the average -- followed by England with 1.9% above average. Northern Ireland is about 2.4% below average, and Scotland is about 6.7% below average. 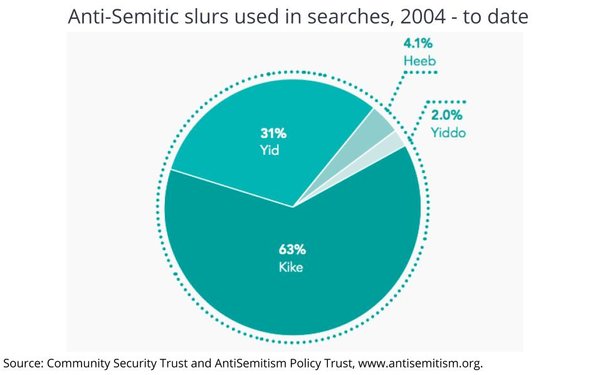