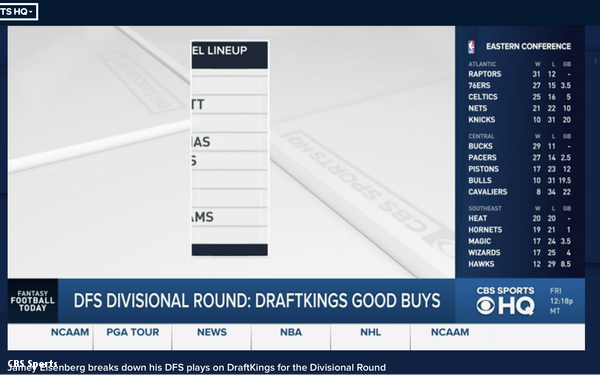 The Super Bowl is the undisputed king of all TV programming. Typically drawing well north of 100 million live viewers, the big game is not only the biggest day for football, but advertising as well.

For CBS, which has the TV rights to the game, the Super Bowl will also be a major test for CBS Sports HQ, the company’s 24-hour live streaming sports news network.

CBS says it is planning more than 30 hours of live-streaming coverage around the Super Bowl starting Monday, January 28 and continuing through February 3.

CBS Sports HQ’s regular lineup will still be streaming, but on location and with a Super Bowl focus. That will include “Kanell and Bell,” “Pick 6 Rundown,” “Reiter’s Block,” and “Sportsline.”

The big test will come on February 3 -- Super Bowl Sunday. The streaming service will have a 10-hour pregame show called “The CBS Sports HQ Extravaganza” starting at 8 a.m. In addition to typical pregame show coverage, every hour will also see a competition between former NFL stars and on-air talent.

Finally, the streaming service will be getting its own post-game show, running until midnight after the game.

The game itself will also stream for free on CBSSports.com and the CBS Sports apps, as well as CBS All Access.

While most sporting events require a subscription or authentication to watch online, CBS is setting up a wide net in order to maximize viewership.

Despite the abundance of streaming coverage, the Super Bowl remains a TV-centric event. Still, with each passing year, and as more traditional TV players enter the streaming fray, the opportunity to expand Super Bowl programming online grows stronger.